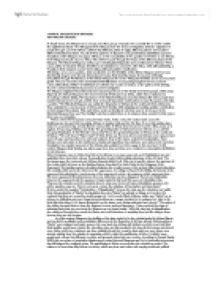 A MENTAL REVOLUTION RE-ENTERING THE AFRICAN DIASPORA In simple terms, the Diaspora as a concept, describes groups of people who currently live or reside outside the original homelands. We will approach the Diaspora from the lenses of migration; that the migration of people through out of the African continent has different points of origin, different patterns and results in different identity formations. Yet, all of these patterns of dispersion and germination/ assimilation represent formations of the Diaspora. My paper will focus on the complexities of the question of whether or not Africans in the Diaspora should return to Africa. This will be focused through the lenses of the different phases in the Diaspora. The historical Diaspora confirms pre-colonial global dispersion and resettlement of Africans. These communities of relocated Africans identified and maintained a connection with Africa, while still maintaining a "Loyalty to their adopted country" and making valid and positive contributions. This brings us to a new question, what exactly then are the identities of the African Diaspora and how was that identity forged under (in and after) slavery? Avatar Brah best illuminates the journey of identity formulation through the literature of the African Diaspora she wrote: "Diasporic identities are at once local and global. They are networks of the transnational identifications encompassing imagined and encountered communities (Brah, 1994)." An individual can activate any number of choices on the path to their identity, thus the context and historical processes must be investigated. ...read more.

I have reached the stage of believing firmly that one must treat the Negroes as one treats beasts." With this mind set of thingafication, the colonizers thought they owned the Slaves and could therefore do anything they feel like doing to them because they are not humans As of the modern Diaspora, the abolition of the slave trade led to the colonial period in African History and resulted in qualitative and quantitative differences in the dispersion of Africans abroad. Unfortunately as "blacks" were enslaved and taken away to the new land, the Africans left behind were lied to and told that their families would have a better life, education wise, and this resulted in the loss all their strong and shrewd men. Africa, which is a continent, was then redistricted and the countries that exist now were drawn over already existing lines/ boundaries of separating which is called the partitioning of Africa. It divided some people and cultures into different countries and grouped others into one country. According to (Joseph Harris, 2001) this new phase of population displacement created internal Diasporas and led to irredentist movements that still plague the continent today. The partitioning of Africa occurred after the colonial era ended. The existence of more than fifty African countries, which vary from each other with varying social and political conditions and different international interests, complicates further the relationships between Africa and its Diaspora. It is uncomplicated for other ethnic groups in Americans to find their roots and where they originate from. ...read more.

Consequently, if direct and effective relations are to be expanded and sustained, Africa and its Diaspora must devise other structures to achieve their goals. This can be non-political organizations/foundation that reaches across national boundaries and represents African governments, private organizations and Diaspora groups for broad consultative purposes and humanitarian assistance. The African world would benefit greatly from having this kind of international structure with financial capability to initiate and fund programs without reliance on outside financial or political support. This will enable Africans and their descendants abroad to sustain their political presence and work with greater confidence in alliance with other groups interested in their social, political and economic well-being. It is of great importance for one to know their history or their true identity to lean and know where you truly came from, connecting back with long lost family, relatives and finding who you are to make u a better person. One can gain closure, knowing that their heritage is not of slave and bondage but that of kings and queens. Dwayne Williams sees a symbiotic relationship between Diaspora and migration. He wrote: "Social processes such as migrations (forced, induced, or voluntary) do not simply divide people of African descent, but can and do serve as a reunifying force" (Williams,1999) Cesaire introduced Negritude which encourages people to learn about their roots and move on. An ideological concept of affirming the independent validity of Negro culture helps one to become attached to their "Blackness". Malcolm X talked about the reeducation of who we are. He became an internationalist because he wanted to connect the blacks here in America with Blacks in Africa. ...read more.