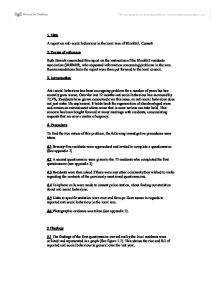 A report on anti-social behaviour in the local area of Blackhill, Consett

1. Title A report on anti-social behaviour in the local area of Blackhill, Consett 2. Terms of reference Ruth Bewick researched this report on the instruction of the Blackhill residents association (20/09/09), who requested information concerning problems in the area. Recommendations from the report were then put forward to the local council. 3. Introduction Anti-social behaviour has been an ongoing problem for a number of years but has recently grew worse, Over the last 12 months anti social behaviour has increased by 12.3%, Residents have grown concerned over this issue, as anti-social behaviour does not just make life unpleasant. It holds back the regeneration of disadvantaged areas and creates an environment where crime that is more serious can take hold. This concern has been bought forward at many meetings with residents, accumulating requests that are now a matter of urgency. 4. Procedure To find the true nature of this problem, the following investigative procedures were taken. 4.1 Seventy-five residents were approached and invited to complete a questionnaire. (See appendix 1) 4.2 A second questionnaire were given to the 75 residents who completed the first questionnaire (see appendix 2) ...read more.

7 Recommendations Based on the conclusions set out in this report it is clear anti social behaviour has grew worse in the area of Blackhill and the community needs more support in tackling this issue. 7.1 Anti social behaviour is costing the local authority thousands of pounds each year, therefore it will cost efficient to place CCTV cameras around the main areas where the most anti social behaviour is occurring. This will not only act as a deterrent but also make residents feel safe in their neighbourhood. 7.2 It is also recommended that new waste bins for litter and dog excrement be placed around the local area along with signs warning of the fines which could be incurred to encourage the public to clean up after themselves. 7.3 Residents suggested that a youth club could be organised for the younger members of the community to participate in or volunteer. A member of the public has volunteered to research areas where this could be appropriate and to find out the costs involved for this, which will be reported back to the appropriate people at a later date. 7.4 It is also recommended that there could be more police officers walking around in the area, which would add as a deterrent to possible perpetrators. ...read more.