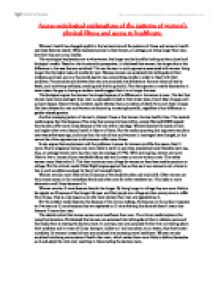 Women’s health has changed rapidly in the last century and the patterns of illness and access to health care have become clearer. What has become clear is that women, on average, are living longer than men, but their lives are not as healthy.

The sociological explanations as to why women live longer can be found by looking at the cultural and biological models. Based on the functionalist perspective, it is believed that women live longer due to the difference in the way they are socialised. This can be seen in such arguments associated with women living longer like the higher rates of suicide for men. Because women are socialised into talking about their problems and men are not, this would lead to men committing suicide in order to ‘deal’ with their problems. Functionalists also believe that men are socialised into behaviours that are risky and lead to death, such as driving recklessly, smoking and drinking alcohol. But that argument is easily disputed as in recent years the gap is closing as modern trends suggest that it is no longer the case.

The biological argues that women live longer because of a difference in hormones to men. The fact that women have more oestrogen than men is supposedly linked to their lower rates of such fatal illnesses such as heart disease. Recent trends, however, easily rebuttal that as incidents of death from such fatal illnesses like heart disease for men and women are becoming increasingly parallel, regardless of any difference in gender related genetics.

Another emerging pattern of women’s physical illness is that women live less healthy lives. The material model argues that this because of the roles they commonly have within society. Bernard (1982) argued that women suffer more illness because of the role within marriage. Women become the carers of men and neglect their own physical health in favour of theirs. But the study supporting this argument was done over twenty-five years ago, and since then the role of men and women in marriages have changed, so this cannot be a firm argument as to why women suffer more illness.

It also argues that employment and the problems it causes for women could be the reason they ill more. Due to pregnancy women are more likely to work in part-time employment and therefore earn less. Also, on average women earn less than men (an average of 17%). With earning less, women are more likely to live in houses of poor standards (damp etc) and in areas prone to violent crime. This makes women more likely to be ill. This then continues into old age for women as they have smaller pensions in old age. But the cultural model (New Right) argues against that as they see it as a woman’s own choice to live in such conditions and get ill; that it isn’t society’s fault.

Women are also more likely to be ill because of the double burden and triple shift. Often women are the primary carers in the immediate family and often care for other members too. This leads to more exhaustion and illness because of it.

Women are also ill more because they do live longer. By living longer in old age they are more likely to be register as ill because of that longer life span and that people ion old age are then more prone to suffer from illness. That is a key reason as to why more women than men are registered as ill.

But the artefact model disputes this because of the clinical iceberg. All because on the surface it appears as if women are ill more because they are registered as ill more (visiting the doctors) doesn’t mean that they are ill more than men.

The statistics show that women access more healthcare than men. The cultural model explains this using functionalism. It’s believed that women are socialised into talking about their problems more and that leads them to visiting the doctors more. In contrast, men are socialised further into not talking about their problems and in times of illness having to ‘soldier on’ and not admit, to an extent, that there’s even a problem. So women instead of men are socialised into accessing more healthcare. Women are also socialised into being more aware of health than men, which makes them more likely to define themselves as ill and adopt the ‘sick role’, resulting in them visiting the doctors more.

Women also visit the doctors more because of their role as a primary carer. They often take other relatives to the doctors and end up talking about their problems themselves. In this way, they access more health care.

But these statistics aren’t always to be trusted because they don’t show everything in contrast. McFarlane claims that more men actually visit the doctors then women; once you’ve excluded visits for menstruation and pregnancy issues. This contradicts the belief that women access healthcare more than men. Also, based on the statistics for general health, women are not necessarily more prone to illness than men

It is clear to see that the current patterns in women’s health are that they are living longer then men but less healthy lives. This has been explained by many models each of which show that it really is the main differences in lifestyle and role which has lead to that happening. But women’s access to healthcare, which on the surface looks like it is greater than that for men, just actually be question as various models suggest that this is either untrue or is unable to give a clear enough picture of what is really going on with this gender differences in access to healthcare.