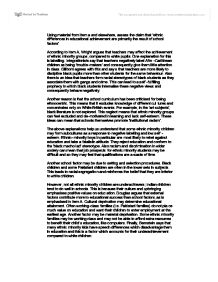 According to Item A, Wright argues that teachers may affect the achievement of ethnic minority groups, compared to white pupils. One explanation for this is labelling.

Using material from item a and elsewhere, assess the claim that 'ethnic differences in educational achievement are primarily the result of school factors' According to Item A, Wright argues that teachers may affect the achievement of ethnic minority groups, compared to white pupils. One explanation for this is labelling. Integrationists say that teachers negatively label Afro-Caribbean children as being 'trouble-makers' and consequently give them little attention in class. Gillborn agrees with this and says that teachers are more likely to discipline black pupils more than other students for the same behaviour. ...read more.

For example, in the 'art subjects', black literature is not explored. This neglect means that ethnic minority groups can feel excluded and de-motivated in learning and lack self-esteem. These ideas can mean that schools themselves promote 'institutional racism'. The above explanations help us understand that some ethnic minority children may form subcultures as a response to negative labelling and low self-esteem. Ethnic- minority boys in particular are most likely to rebel against education and take a fatalistic attitude. They reject education and conform to the 'black macho lad' stereotype. ...read more.

This is because their culture and upbringing emphasises positive values on education. Douglas argues that external factors contribute more to educational success than school factors, as is emphasised in Item A. Cultural deprivation may determine educational attainment. Often working-class families (i.e. Pakistani families) do not place much value on education and want their children to enter employment at the earliest age. Another factor may be material deprivation. Some ethnic minority families may be working class and may not be able to afford extra resources to benefit their child's education, like computers. Finally, Bernstein says that many ethnic minority kids have speech differences which disadvantage them in education and this is a factor which accounts for their underachievement compared to white children. ...read more.