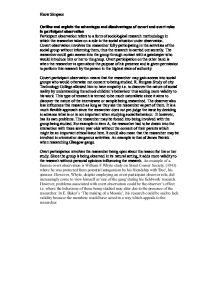 Advantages and disadvantages of covert and overt participation

This type of research is termed to be much naturalistic since it aims to discover the nature of the interviewee or sample being researched. The observer also less influences this research as long as they see the researcher as part of them. It is a much flexible approach since the researcher does not pre-judge the issue by deciding in advance what is or is not important when studying social behaviour. It however, has its own problems. The researcher may be forced into being involved with the group being studied. For example in item A, the researcher had to be drawn into the interaction with these seven year olds without the consent of their parents which might be an important ethical issue here. ...read more.

An example of a famous overt observation is William F.Whyte study on Street Corner Society, (1943) where he was protected from potential antagonism by his friendship with 'Doc', his sponsor. However, Whyte, despite employing an overt participant observer role, did increasingly come to view himself as 'one of the gang' during his fieldwork research. However, problems associated with overt observation could be the observer's effect i.e. where the behaviour of those being studied may alter due to the presence of the researcher. In E. Baker's 'The making of a Moonie', his research could be said to lack validity because the members would have acted in a way which appeals to the researcher. ?? ?? ?? ?? Ekow Simpson ...read more.