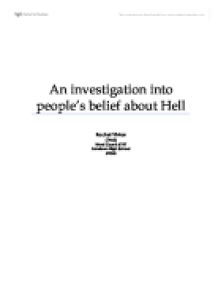 An investigation into people(TM)s belief about Hell

An investigation into people's belief about Hell Rachel Vivian (7465) Word Count: 6747 Sandown High School 59043 Table of Contents Rationale 3 Context 5 Methodology 8 Results 11 Fig 1.1 12 Fig 1.2 13 Fig 1.3 14 Fig 1.4 16 Fig 1.5 17 Fig 1.6 18 Fig 1.7 20 Evaluation 22 Appendices 25 Rationale Rationale With a sharp decrease in the number of people believing in hell1, whether inside or outside the church, there is growing concern among sociologists that this, along with the general secularisation of the country2, is leading to a less integrated society and one which is no longer conforming to rules. Religion used to be society's source of moral guidelines, norms and values, with the belief in Hell instilling in people fear of eternal damnation for their wrongdoings. However, people today no longer have this sense of fear that once used to cause them to follow moral guidelines, according to people such as new right sociologist John Redwood and functionalist Talcott Parsons, this is directly linked to a reduction in social integration and thus the increase in juvenile delinquency observed today. The study will use a questionnaire and will include questions on peoples' general beliefs, their beliefs in hell and their views how this belief affects their life. This will allow the collection of quantitative data on the number of people who are religious, who believes in Hell, and how this belief affects their life and the collection of qualitative data as to why people no longer believe in hell and their views how this belief affects their life, which is essential to this study. Using a questionnaire is also less-time consuming than methods such as interviews, thus allowing extra time for the processing of data, equally, as the questionnaires will be anonymous, more valid answers should be gained. The questionnaire will be handed out to 10 males and 10 females in sixth form at Sandown High School as this is an age where a number of young adults ...read more.

well as this, due to the fact that the participants were selected from the library, it could be seen that the participants are not typical people. Despite this, the quantitative results of the study can still be seen as reliable, that is, 'yielding the same or compatible results in different clinical experiments or statistical trials.' The results also reflect research that was mentioned in both the rationale and the context and so can be assumed to be typical results that would be repeated should the study be used again. The qualitative results however, may not be as reliable, as with another sample, the results collected may be different. The results for the study are presented below. Fig 1.1 - Graph of the results of question 1 and the gender of participants showing the number of religious and non-religious males compared to the number of religious and non-religious females. The graph above is an analysis of the results of question one, and the gender of the participant filling out the questionnaire. It can be seen from the graph above that the same number of males and females are religious out of the sample selected. This shows therefore that the sample is not biased and that there is an equal distribution of religious people between the two genders making the results more valid. It also suggests, that at least in the sixth form of Sandown High School, religion is not male dominated as suggested by the research into Religious Fundamentalism mentioned in the context and the organisation of religion as a whole, but also that it is not female-dominated which is what was expected due to the prominence of women in churches in the west. Out of those who are religious, it could be seen from the answers to questions 2 and 3 that one male was Buddhist, one Roman Catholic, and one belonged to the Church of Jesus Christ of Latter Day Saints, however, it was a surprise to see that the Buddhist and the Roman Catholic claimed that their religion does not really affect their life. ...read more.

However, the study may not have been entirely valid as participants may have experienced the Hawthorne effect where they give the answers that they believe the researcher wanted, this would have the affected the validity of the study as the answers given would not have been completely true. Another issue with this study is that the results could not be generalised past sixth form students at Sandown High School, Isle of Wight as no other age groups or high schools were studied, as well as this, due to the fact that the participants were selected from the library, it could be seen that the participants are not typical people. As well as this, my own views may have affected the results. I do believe in Hell and this belief affects my life. This therefore means that the results may not have been interpreted entirely subjectively. Nevertheless, this is not a large issue as the results still differ greatly from my own beliefs and so it can be assumed that my own beliefs did not majorly affect the interpretation of the results and thus this means that the results can still be seen as valid and reliable results. If this study was repeated, there would be a number of things that would change. The researcher would have to hand the out the questionnaire and ask them to post it back, or hand it in to a neutral place to try and cancel out the consequences of the Hawthorne Effect. If this study was continued, it would be helpful to extend the study using triangulation. It would useful to follow up the questionnaires with interviews to further investigate the answers given in the questionnaires and also to use participant observation to see how peoples' beliefs about Hell affect their lives. It would also be helpful to continue the study and look at why people no longer believe in Hell and to discover if this lack of belief in Hell affects religion's place as a source of moral guidelines or values. Appendices Appendices Fig 1. ...read more.