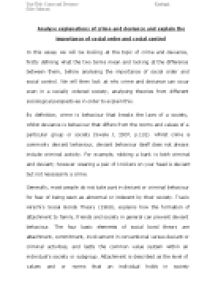 ﻿Unit Title: Crime and Deviance Kayleigh Giles-Johnson Analyse explanations of crime and deviance and explain the importance of social order and social control In this essay we will be looking at the topic of crime and deviance, firstly defining what the two terms mean and looking at the difference between them, before analysing the importance of social order and social control. We will then look at why crime and deviance can occur even in a socially ordered society, analysing theories from different sociological perspectives in order to explain this. By definition, crime is behaviour that breaks the laws of a society, whilst deviance is behaviour that differs from the norms and values of a particular group or society (Swale J, 2007, p.131). Whilst crime is commonly deviant behaviour, deviant behaviour itself does not always include criminal activity. For example, robbing a bank is both criminal and deviant; however wearing a pair of knickers on your head is deviant but not necessarily a crime. Generally, most people do not take part in deviant or criminal behaviour for fear of being seen as abnormal or indecent by their society. Travis Hirschi?s Social Bonds Theory (1969), explains how the formation of attachment to family, friends and society in general can prevent deviant behaviour. ...read more.

However, this does not explain non-utilitarian crime such as vandalism. In contrast, subcultural theories say that crime and deviance is actually conformity for some groups in society; Albert Cohen (1955) said that working class boys, frustrated by lack of opportunities, joined or created groups with alternative cultural values, which tend to be the opposite of mainstream society, so deviant behaviour then becomes the norm (Parsons, 2004, p.72). However, WB Miller (1962) argues that general working class culture encourages law-breaking behaviour as opposed to subcultural gangs, with delinquents simply conforming to the ?focal concerns? of their culture. However, according to Marxism, laws are not the will of the people. It sees crime not as the result of subcultural influences but a consequence of capitalism. Pearce (1976) argued that the laws are created purely in the interests of the ruling class. It is argued that the system is ?rigged? against the working class and suggested that ruling class lawbreakers are less likely to be punished ? for example, working class crimes such as burglary are treated as the ?real criminals? by the media whilst corporate law-breakers get very little media condemnation and are treated more leniently by the justice system (Parsons, 2004, p.76). Crimes such as robbery and property theft is seen by Marxists such as Bonger (1916) ...read more.

In contrast to the idea of looking at society as a whole or strengthening the policing, Postmodernists argue that it is in fact down to the increasing individualisation of people and a breakdown of attachment to society. In modern society, people?s sense of identity has more to do with what they see in the media and the brands they buy into, whilst having less to do with their family or religion. This consumer culture encourages people to be individual and break away from the morals and values of their community. According to the Social Bonds Theory, those who are less attached to society are indeed more likely to commit crime. In conclusion, despite crime and deviance not being the norm within most people in society, there is plenty of evidence to say it still occurs for many different reasons. Where left realists, Functionalists and Postmodernists agree that consumer culture and personal lack of success may be to blame for a certain extent, it is other ideas such as those of Marxism and right realists who suggest the very things that are supposed to prevent crime, such as policing, authorities and laws, are in fact responsible for it. Reference List 1. Social Bonds Theory - Available online at: http://criminology.wikia.com/wiki/Social_Bond_Theory [Accessed 31st February 2013] 1. Parsons, R (2004) AS Level Sociology: AQA Revisions Guide, UK: CGP Publishings Ltd. 1. ...read more.