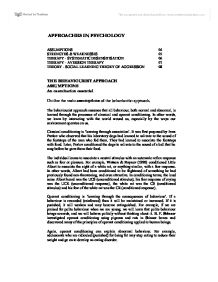 APPROACHES IN PSYCHOLOGY ASSUMPTIONS 04 STRENGTHS & WEAKNESSES 05 THERAPY - SYSTEMATIC DESENSITISATION 06 THERAPY - AVERSION THERAPY 07 THEORY - SOCIAL LEARNING THEORY OF AGGRESSION 08 THE BEHAVIOURIST APPROACH ASSUMPTIONS An examination essential Outline the main assumptions of the behaviourist approach. The behaviourist approach assumes that all behaviour, both normal and abnormal, is learned through the processes of classical and operant conditioning. In other words, we learn by interacting with the world around us, especially by the ways our environment operates on us. Classical conditioning is 'learning through association'. It was first proposed by Ivan Pavlov who observed that his laboratory dogs had learned to salivate to the sound of the footsteps of the man who fed them. They had learned to associate the footsteps with food. Later, Pavlov conditioned the dogs to salivate to the sound of a bell that he rang before he gave them their food. The individual learns to associate a neutral stimulus with an automatic reflex response such as fear or pleasure. For example, Watson & Raynor (1920) conditioned Little Albert to associate the sight of a white rat, or anything similar, with a fear response. In other words, Albert had been conditioned to be frightened of something he had previously found non-threatening, and even attractive. In conditioning terms, the loud noise Albert heard was the UCS (unconditioned stimulus), his fear response of crying was the UCR (unconditioned response), the white rat was the CS (conditioned stimulus) and his fear of the white rat was the CR (conditioned response). Operant conditioning is 'learning through the consequences of behaviour'. If a behaviour is rewarded (reinforced) then it will be maintained or increased. If it is punished, it will weaken and may become extinguished. For example, if we are praised for polite behaviour when we are young, we will learn that polite behaviour brings rewards, and we will behave politely without thinking about it. ...read more.

He proposed there are three stages in General Adaptation Syndrome: alarm - resistance - exhaustion. In the alarm stage, the ANS (autonomic nervous system) produces high levels of adrenaline and other adrenal hormones such as steroids to prepare the body for 'fight or flight'. There is a brief initial shock phase when blood pressure (BP) and muscle tension drop. Resistance to the stressor is reduced. But this is quickly followed by the countershock phase when the body's physiological defences swing into action. In the resistance stage, the ANS (autonomic nervous system) returns to normal, but the body continues to use its physiological resources to resist the effects of the stressor. During this stage, there is more careful use of the body's resources, and there is also the use of coping strategies, e.g. denying the situation is stressful. In the exhaustion stage, the physiological systems become depleted and ineffective, and stress-related illnesses (e.g. high blood pressure, asthma, heart disease) become more likely. Selye (1956) also found that if a second source of stress was introduced during the exhaustion stage, it could have devastating consequences for the health of individual. THE PSYCHODYNAMIC APPROACH ASSUMPTIONS - an examination essential Outline the main assumptions of the psychodynamic approach. The psychodynamic approach assumes that experiences in our earliest years can affect our emotions, attitudes and behaviour in later years without us being aware that it is happening. Freud suggested the mind or psyche has three parts: the conscious, the preconscious, and the unconscious. Freud suggested that individuals can never be aware of the contents of the unconscious. He also suggested that there is often conflict between the id and the superego in the unconscious. The id represents a person's basic drives, such as the sexual drive, and the superego represents the conscience we develop by living in a society. These two parts of the psyche need to be managed by the ego. ...read more.

Attribution theory suggests that when we see a person behaving in a way we do not understand, we try to work out in our minds why he is behaving that way. In other words, we try to attribute reasons for his behaviour. We then go on and try to predict the consequences of his behaviour, i.e. what is going to happen next. According to Kelley (1967, 1973), when we are making these attributions, we follow a set of rules. Firstly, we try to decide whether the individual is responsible for his own actions, secondly, whether someone else is responsible and thirdly, whether the situation itself is the cause of the person's behaviour. No matter what the cause, Kelley believes that we will try to work out what is happening, and in order to this, we need more information. Kelley (1973) distinguished between dispositional attribution (that's the kind of person who would behave that way), and situational attribution (he did it because of the situation he was in). For example, we would not expect a kind person to behave in a cruel way because we know they have a kind disposition. So we would try to explain their behaviour in terms of the situation they were in. Kelley proposed that when we have sufficient information, we can detect the co-variation of the person's behaviour and its possible causes. We can then work out the causes of the behaviour and its consequences. Kelley (1973) recognised that we sometimes we apply the discounting rule. According to this rule, if there is strong evidence that the situation is responsible for someone's behaviour, then we will tend to ignore evidence pointing towards a dispositional attribution. Kelley's theory has been criticized because we sometimes make attributions about the behaviour of other people very rapidly, e.g. on 'gut instinct' and ignore the co-variation information. Our attributions may also be influenced by our attitude towards the individual; for example, we will give a friend the benefit of the doubt and say the situation was to blame, not him, even if the evidence points to the contrary. ?? ?? ?? ?? 2 ...read more.