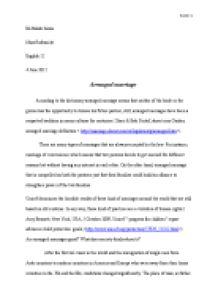 ﻿Salim El-Mehdi Salim Miss Rufenacht English 12 4 June 2012 Arranged marriage According to the dictionary arranged marriage means that neither of the bride or the groom has the opportunity to choose his future partner, still; arranged marriages have been a respected tradition in many cultures for centuries.( Sheri & Bob Stritof, about.com Guides, arranged marriage definition < http://marriage.about.com/cs/legalities/g/arranged.htm>). There are many types of marriages that are always accepted by the law. For instance, marriage of convenience which means that two persons decide to get married for different reasons but without having any interest in each other. On the other hand, arranged marriage that is compelled on both the partners just that their families could build an alliance to strengthen power of the two families. Unicef denounces the horrible results of these kind of marriages around the world that are still based on old customs. In any way, those kind of practices are a violation of human rights.( Amy Bennett, New York, USA, 5 October 2009, Unicef ? progress for children? report advances child protection goals,<http://www.unicef.org/protection/57929_51312.html>). Are arranged marriages good? What does society thinks about it? After the first oil crises in the world and the immigration of single men from Arab countries to modern countries in America and Europe who were away from their home countries in the 70s and the 80s, conditions changed significantly. ...read more.

Those arranged marriages are illegal, nonetheless they still exists because most of these women are afraid to speak for themselves and defend their rights or because the authorities of the home country or the host country cannot interfere in a cultural convention. (by Hena Zuberi, muslimmatters.org; December 22,2011;arranged marriage is not forced marriage<http://muslimmatters.org/2011/12/22/arranged-marriage-is-not-forced-marriage/>). Arranged marriage: arrangement with the consent of the spouses. Forced marriage: arrangement without the consent of one or both of the spouses. Marriage cannot be concluded only with the free will of the future bride and groom.( article 16(2) from the declaration of human rights). Arranged and forced marriages are a taboo, that?s why they are not listed; there is no spastics to classify this phenomenon. ( published on may 20,2012, topic taboo: arranged marriages,< http://the-outside-edge.tumblr.com/post/23358573765/taboo-topic-arranged-marriages>). Formerly, marriage of convenience was most common among the aristocracy the bourgeoisie families, it seems that only at the end of the 18th century that arranged married marriages have vanished in the European society. Same as in a business company to survive blending more and more about their romantic feelings. This evolution is influenced by many factors, such as: industrialization, open markets, wage labor, the gradual improvement of living but also with engorgements of the government and the church. In all the primitives civilizations, women have no right to talk, discuss or peak for their marriages, they think the men knows what is best for them and it?s a men business ...read more.

Are those arranged marriages good for both of the future partners? Religion had a lot to say about this issue, but there was nothing to do about it because they say that end its still marriage and it?s better than adultery. Although, people should not mix between religion and traditions, they are two different things and people always related them. Arranged marriages are still common these days even in the most sophisticated European societies, though; they seem to have vanished and they re-appeared on the surface a few years ago among the immigrate people who brought their customs and traditions from their home countries. Notwithstanding, there had been police reports from everywhere about those girls were obliged to marry other guys they don?t know but they were nothing to do about it. People always mix between forced and arranged marriage, they think it?s the same thing which is not: force marriage is when the two spouses are forced to get married with being asked about it, while arranged marriage means the consent of one of the spouses by their parents. Some thinks that arranged marriage are taboos and some does not, any way everybody has their free thoughts. Organizations that protect the children and human rights should prevent parents and inform them about the danger of this kind of practices that could damage their child?s life. Communication with families is the only way to change the parents? attitude positively. ...read more.