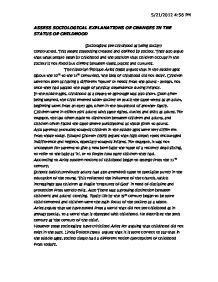 ASSESS SOCIOLOGICAL EXPLANATIONS OF CHANGES IN THE STATUS OF CHILDHOOD

ASSESS SOCIOLOGICAL EXPLANATIONS OF CHANGES IN THE STATUS OF CHILDHOOD Sociologists see childhood as being socially constructed. This means something created and defined by society. They also argue that what people mean by childhood and the position that children occupy in the society is not fixed but differs between times, places and cultures. The historian Philippe Aries (1960) argues that in the middle ages (about the 10th to the 13th centuries), 'the idea of childhood did not exist'. Children were not seen as having a different 'nature' or needs from the adults- atleast, not once they had passed the stage of physical dependence during infancy. In the middle ages, childhood as a separate age-stage was also short. Soon after being weaned, the child entered wider society on much the same terms as an adult, beginning work from an early age, often in the household of another family. Children were in effect mini adults with same rights, duties and skills as adults. ...read more.

Ruth Benedict (1934) argues that children in simpler, non-industrial societies are generally treated differently from modern western countries, for example, they take responsibility at an early age. Samantha Punch's (2001) study of childhood in rural Bolivia found that, once children are about five years old, they are expected to take work responsibilities in the home and the community. Tasks are taken on without question or hesitation. The 'march of progress' view argues that, over the past few centuries, the position of childhood in western societies has been steadily improving. Sociologists such as Aries and Shorter hold a 'march of progress' view. They argue that today's children are more valued, better cared for, protected and educated, enjoy better health care and have more rights than those of previous generations. For example, better health care and higher standards of living mean that babies have a much better chance of survival now than a century ago. In 1900 the infant mortality rate was 154 per 1000 live births. ...read more.

On the other hand, unlike Postman Iona Opie (1993) argues that childhood is not disappearing. She argues that there is strong evidence of the continued existence of a separate children's culture over many years. Her studies show that children can and do create their own independent culture separate from that of adults contradicting Postman's claim that children's own unsupervised games are dying out. Child liberationists argue that, far from disappearing, western notions of childhood are being globalised. International humanitarian and welfare agencies have exported and imposed on the rest of the world, western norms of what childhood should be- a separate life stage, based in the nuclear family and school, in which children are innocent, dependant and vulnerable and have no economic role. In conclusion, the evidence suggests the 'march of progress' view that the status of childhood has improved is more stronger. Although certain conflict views are true to some extent, in terms of inequality, there is clearly a vital improvement in the status of children in the society in comparison to previous generations. ?? ?? ?? ?? 29/10/2010 18:16 29/10/2010 18:16 29/10/2010 18:16 ...read more.