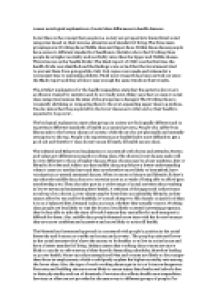 ﻿Assess sociological explanations of social class differences in health chances. Social Class is the concept that people in a society are grouped into hierarchical social categories based on their income, education and standard of living. The three main groupings are: Working class, Middle class and Upper class. Within these classes people have access to different standards of healthcare. Statistics show that Working Class people have higher mortality and morbidity rates than the Upper and Middle classes. This is known as the ?health divide?. The black report of 1980 was the first time the health divide was identified and the findings were so bad that the Government tried to prevent them from going public. Only 260 copies were made and released at a convenient time to minimize publicity. Much more research has been carried out since the Black report and they all show near enough the same trends in their results. ...read more.

Norms and values are different among the working class. The choices lower classes make will be very different to those of higher classes. These choices may be about medicine, diet or lifestyle. Howlett and Ashley say that middle class people have a better understanding when it comes to medical care and they are therefore more likely to breastfeed, have vaccinations or attend antenatal classes. When it comes to leisure and lifestyle, Robert?s says that the middle class choose to exercise more as a result of being able to afford gym memberships etc. They also take part in a wider range of social activities thus resulting in lower stress and maintaining their health. A criticism of this approach is that it may not always be a choice. Lower classes maybe forced into an unhealthy lifestyle, as they cannot afford to eat and live healthily. It?s much cheaper to fill a family on junk food than it is on a balanced diet. ...read more.

Factories and building sites are more likely to cause injury than banks and schools due to their physicality and use of chemicals. Provision also affects health care inequalities. Services on offer are not provided in the same way to different groups of people. For example the postcode lottery. This determines the different level of treatment you?re given depending on where you live. Also inequality is the ?Inverse care law?, which is the idea that Doctors don?t want to set up surgeries in deprived areas as they find it easier to interact with middle class patients. Finally there?s private healthcare. The argument is that it?s seen as unfair because you shouldn?t get higher treatment standards just because you can afford it. Sociologists think that the Material and structural argument is the strongest, because wealth is the biggest factor affecting a person?s position in society and their social class. The material situation of the poor is what determines their poorer health in comparison to higher classes. ...read more.