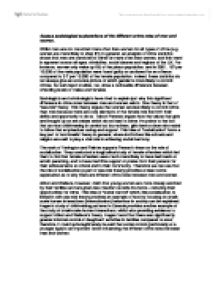 Whilst men are not convicted more often than women for all types of crime (e.g. women are more likely to shop lift), in general, an analysis of crime statistics shows that men are convicted of crime far more often than women, and this trend is apparent across all ages, ethnicities, social classes and regions of the UK. For instance, women only make up 6% of the prison population, and in 2001, 167 per 10,000 of the male population were found guilty or cautioned for an offence compared to 3.7 per 10,000 of the female population. Indeed, these statistics do not always give an accurate picture of which gender is more likely to commit crimes, but self-report studies, too, show a noticeable difference between offending levels of males and females.

Sociologists and criminologists have tried to explain just why this significant difference in crime rates between men and women exists. One theory is that of “sex-role” theory. This theory argues that women are less likely to commit crime than men because there are core elements of the female role that limit their ability and opportunity to do so. Talcott Parsons argues how the values that girls are brought up on are values which do not lead to crime. He points to the fact that as most child-rearing is carried out by mothers, girls have a clear role model to follow that emphasizes caring and support. This idea of “socialization” forms a key part to functionalist theory in general, where institutions like schools and religion are said to play a vital role in achieving social harmony.

The work of Farrington and Painter supports Parson’s views on the role of socialization. They conducted a longitudinal study of female offenders which led them to find that female offenders were much more likely to have had harsh or erratic parenting, and to have had little support or praise from their parents for their achievements at school and in their community. Therefore we can see that the role of socialization (a part of sex-role theory) provides at least some explanation as to why there are different crime rates between men and women.

Abbot and Wallace, however, claim that young women are more closely watched by their families and are given less freedom outside the home - reducing their opportunities for crime. This idea of “social control” which, like socialization, is linked in with sex-role theory provides an example of how by focusing on small-scale human interactions (interactionism) behaviour in society can be explained. Hagan’s study of child-raising patterns in Canada provides another example of the study of small-scale human interactions, whilst also providing evidence to support Abbot and Wallace’s theory. Hagan found that there was significantly greater informal control of daughters’ activities in families compared to sons’, therefore, it could quite legitimately be said that social control (particularly at a younger age) is an important factor influencing the different crime rates between men and women.

Having said that, Ian Marsh (1986) claims that men commit more crime because they have more opportunities to do so. Men are typically more independent throughout their lives when compared to women, who, in contrast, are marginalized in a narrower range of roles. Feminists would claim women are marginalized in more restricted roles (such as motherly, caring roles) because we live in a patriarchal society which limits females’ opportunities. Evidence which Marsh uses to support his view is that women more frequently handle stolen goods because they have more opportunities to sell and use stolen goods, therefore, if women were to have the same amount of opportunities as men to commit crimes, then they would commit the same, or a similar amount, of crimes.

Indeed, when examining the difference between mens’ and womens’ crime rates, it can be all too easy to focus purely on why women appear to commit much less crime than men. However, Katz, a postmodernist, has looked at the “seductions of crime”. He claims that when young men are unsure of exactly who they are and what their place in society is they can turn to crime (particularly dangerous, risky crime like robbery) as it can provide a thrill which is a welcome break from boredom. Lyng builds on the ideas of Katz by arguing that young males search for pleasure through risk-taking (“edgework”). He argues that there is a thrill to be gained from acting in dangerous, insecure ways which inadvertently allows these young men to “accomplish masculinity”.

Both Lyng and Katz’s work has, however, been criticized for not slotting the notions of masculinities into a context. In other words, they do not, for example, explain why young working-class males are more likely to be violent than older middle-class males. Winlow claims the answer to this question is that a significant amount of the male working class population has been excluded from the low level, white collar jobs which have resulted from changes in the structure of the economy. According to Wilson, this has resulted in the development of an urban underclass who manifest a range of violent and antisocial behaviours.

It is clear therefore that there are a number of different sociological explanations for the different crime rates between men and women. These explanations focus upon the social influences which cause women to commit crime, and the social influences which cause men to commit crime, whilst each view takes a different theoretical approach in trying to explain the differences.