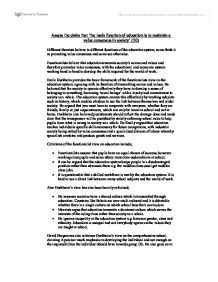 Assess the claim that 'the main function of education is to maintain a value consensus in society' (20) Different theorists believe in different functions of the education system, some think it as promoting value consensus and some see otherwise. Functionalists believe that education transmits society's norms and values and therefore promotes value consensus, with the educational and economic system working hand in hand to develop the skills required for the world of work. Emile Durkheim provides the basic framework of the functionalists view on the education system, agreeing with its function of transmitting norms and values. He believed that for society to operate effectively they have to develop a sense of belonging to something, becoming 'social beings' with a loyalty and commitment to society as a whole. The education system creates this effectively by teaching subjects such as history, which enables children to see the link between themselves and wider society. He argued that you must learn to cooperate with everyone, whether they are friends, family or just acquaintances, which can only be learnt at school and not at home. Durkheim also believed punishments should reflect the damage done and made clear that the transgressor will be punished by strictly enforcing school rules to help pupils learn what is wrong in society as a whole. He finally argued that education teaches individuals specific skills necessary for future occupations, with industrial society being united by value consensus and a specialised division of labour whereby specialists combine and produce goods and services. ...read more.

* Pupils are motivated by external rewards such as good grades. They claim learning is based upon the 'jug and mug' principle, meaning the teachers possess the knowledge which they pour into the 'empty jugs'. * Fragmentation of school subjects, by having the student move around from one subject to another, with little connection between them, this corresponds to the fragmentation of the workforce as most of the time jobs are broken down into specific tasks performed by individuals so workers are denied knowledge of the overall process, making it impossible to compete with their employers. Bowles and Gintis therefore believe that the hidden curriculum produces a passive and obedient workforce that accepts authority without question, which is motivated by rewards and which is fragmented. They claim that capitalism needs a surplus of skilled labour which maintains the high rate of unemployment and ensures that workers of all levels of skill have to compete with each other for jobs. Employers can pay low wages by threatening dismissal and replacement by a reserve army of skilled labour. The illusion that everybody has an equal chance is created by the education to help legitimate social inequality, claiming that those who achieve high qualifications deserve their success; this is a myth of meritocracy. Criticisms of Bowles and Gintis include; * Brown et al (1997) argue that changes in the workplace have actually increased the importance of team working rather than isolating individuals. * They are criticised for their claims about the way schools shape personality. ...read more.

3. Teacher's expectations and attitudes - Although much has changed in recent years, Heaton and Lawson (1996) argue that many teachers still have strong sexist attitudes towards tasks in the classroom e.g. boys are still asked to move furniture around. 4. Through a patriarchal curriculum - Many feminists argue what is taught in school still creates gender inequality in education. The way sport is taught tends to focus more on the achievement of boys than girls e.g. football. The choices made by boys and girls in A Levels are still strongly gender specific in some areas. 5. Through a lack of positive role models - Despite the fact that there are more female teachers in England and Wales, more men occupy the senior management levels, with few black female teachers. Feminists argue that this creates an expectation that positions of power and authority are automatically associated with men. Education is seen as a major source of gender socialisation by feminists. Different feminists highlight different aspects of the education system that enforce an ideology that males are naturally in positions of power and authority. The hidden curriculum shows a variety of ways that these processes work. However, do remember that despite the many problems that females face in school, they are generally outperforming males in all areas of education, so stop complaining. In conclusion, the functionalists believe that the main function of education is to maintain a value consensus in society, however the Marxist view is that the main role is to serve the needs of capitalism, creating a socialising a new workforce, and the feminists believe that the role is to maintain a state of patriarchy. ...read more.