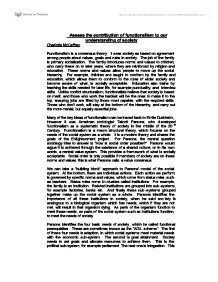 Functionalism is a consensus theory.  It sees society as based on agreement among people about values, goals and rules in society.  The job of the family is primary socialization.  The family introduces norms and values to children, who carry these on to later years, where they are reinforced by religion and education.  These norms and values allow people to move up the social hierarchy.  For example, children are taught to conform by the family and education, which allows them to conform to the rules of wider society and become aware of what, is socially acceptable.  Education also trains by teaching the skills needed for later life, for example punctuality, and interview skills.  Unlike conflict structuralism, functionalists believe that society is based on merit, and those who work the hardest will be the ones to make it to the top, ensuring jobs are filled by those most capable, with the required skills.  Those who don’t work, will stay at the bottom of the hierarchy, and carry out the more menial, but equally essential jobs.

Many of the key ideas of functionalism can be traced back to Emile Durkheim,

However it was American sociologist Talcott Parsons, who developed functionalism as a systematic theory of society in the middle of the 20th Century.  Functionalism is a macro structural theory, which focuses on the needs of the social system as a whole.  It is a modern theory and shares the goals of the Enlightenment project.  For Parsons, the central question sociology tries to answer is “How is social order possible?”  Parsons would argue it is achieved through the existence of a shared culture, or in his own words, a central value system.  This provides a framework of what is socially acceptable.  Social order is only possible if members of society are on these norms and values, this is what Parsons calls, a value consensus.

We can take a “building block” approach to Parsons’ model of the social system.  At the bottom, there are individual actions.  Each action we perform is governed by specific norms and values, which come from status roles, such as teachers.  Status roles come in clusters called institutions.  For example, the family is an institution.  Related institutions are grouped into sub-systems, for example factories, banks etc.  And finally these sub-systems grouped together make up the social system as a whole.  Parsons identifies the importance of all these institutions in society, when he said society is analogous to a biological organism which has needs, which if they are not met, will result in that organism dying.  As parts of the organism function to meet these needs, so parts of the social system such as institutions function, to meet the needs of society.

Parsons identifies the four basic needs of society, which he called functional prerequisites.  These are sometimes known as the “AGIL scheme.”  The first of these four needs is adaption, in which social systems meet material needs with the economic sub-system.  The second is goal attainment.  Society needs to set goals and allocate resources to achieve them.  This is the political sub-system, for example parliament. The next one is integration.  This is referring to Parsons belief that different parts must be integrated together in order to pursue shared goals. This is where the sub-system of religion comes in.  The fourth and final basic need of society that Parsons identifies is Latency.  This refers to the process that maintains society over time.  This is the kinship sub-system, and is about adults having a place to let off steam, and being able to manage tension.  Parsons describes adaption and goal attainment as instrumental needs, and he describes integration and latency as expressive needs- they involve the expression or channelling of emotions.  The social institutions all working effectively to meet these needs and produce social stability is called social equilibrium.   Therefore, social institutions can be studied in terms of functions they perform for society and for other sub-systems.  A criticism against this would be that Parsons assumes that all institutions serve a positive role in society.

Although it was Talcott Parsons who developed functionalism, many of the key ideas can be traced back to Emile Durkheim, a French sociologist and pioneer in the development of modern sociology and anthropology. In 1895, Durkheim wrote “The Rules of Sociological Method”.  In this, Durkheim stressed that sociology as a science would be characterized not by abstract theory, but rather by observation.  He also stressed the importance of social facts, and how they provide both functional and causal explanations.  He believed that the whole aim of sociological research is to establish causal explanations of social behaviour and the functions of social facts.  Another contribution of Durkheim’s is the idea that society exists as a separate entity over and above it’s members, and that it is a system of external “social facts” which shape their behaviour, to serve the needs of society.  Similarly to Parson’s, Durkheim’s belief that social facts can be explained in terms of their function is the basic principle of functionalist analysis.  He believes that social facts exert obligations on individuals, determining their actions.  He believed that sociological research should treat social behaviour as the natural scientist would treat the behaviour of particles, through the application of scientific principles.  Like Comte, Durkheim saw his task as the creation of a science of sociology. He believed that sociology could, and should intervene scientifically, and said in regard to human behaviour, “real laws are discoverable”.

Durkheim’s principles were applied in the his complex study of Suicide, published in 1897, in which his aim is to demonstrate that even the  most personal of acts are ultimately determined by society, and that the suicide-rate is therefore a ‘social fact’.  In this study, Durkheim explores and compares the difference in suicide rates among Catholics and Protestants.  In his conclusion, he attempted to explain that stronger social control among Catholics resulted in lower suicide rates.  His view was that Catholic society had normal levels of integration, and that Protestant society has low levels of integration, which resulted in them having a higher suicide rate. There have been some criticisms with his interpretation, such as being an example of the logical error called the ecological fallacy, in which a fallacy falsely assumes that individual members of a group have average characteristics, and it usually contains stereotype.  Also, it was found that the differences in suicide rate seemed to be limited to German-speaking Europe, and therefore may have been a result of many other factors as well.  However, despite having its flaws, Durkheim’s work on suicide has been praised as a classic sociological study.

Possibly one of the most important questions Durkheim raises in his work is whether or not sociology is a science, and in theme with this, whether or not laws can be drawn up in society.  Both positivists and anti-positivists believe that sociology is a science.  However, they differ as to how society is defined.  Positivists are of the opinion that anti-positivist methods are not scientific, as they do not emulate the natural sciences, and anti-positivists countered this by saying that their methods produced more valid data than both the natural sciences, and positivists, and they questioned whether this meant positivist’s methods were as scientific as they claimed.   The idea that sociology was a science was first introduced by Comte, who argued that there was a possibility of sociology becoming the pinnacle of all scientific subjects. He argued that if sociologists could discover the cause of negative human behaviour, they could eliminate it, and make society a better place to live, improving the human condition.   This means that if a cause of behaviour is determined, it can be predicted, and negative behaviour can be prevented. Acceptance of this aspect of sociology depends on the view on human nature, as it is based the view that humans are animal like, and in this sense, will all react the same way.

There are many criticisms of functionalism.  Merton, the critic within functionalism, recognised some of the problems within Parson’s approach, one of which was that he assumed that all institutions in our complex modern society always promote social utility.  This is disproved by the idea of different religions in our society.  A second is that he assumed all institutions only perform positive functions.  This is disproved by the idea of suffering within the family, with issues such as domestic abuse, and the bad influence of the media, with eating disorders. Merton argues that despite socialisation attempt at establishing the same set of values for all citizens, individuals react in different ways, with some conforming, others rebelling, others create new, or go through the motions with the values that supposedly form a consensus.  He argues that Parsons doesn’t take into account that there are different values in society, such as classes, gender and ethnicity, and all of these having different views.

Other criticisms of functionalism are that it is teleological, in other words, it explains causes by effects.  An example of this is that he assumes that if an institution exists, it must play a positive role, and then sets out to explain the positive role it plays.  This is illogical, as the cause needs to be determined before the effect takes place.  Another criticism is that it is overly deterministic, in that it assumes that human behaviour is dictated to by the social system, and the agencies of socialisation within it, meaning the idea of free will is completely ignored.  The view of human beings being animal like is central to functionalist theory, as is the belief that people are like puppets on a string, and will always react in similar ways.  Another criticism is in regards to the argument put forward by Davis and Moore about the justification for social inequality.  It is seen to only justify social inequality, rather than explain it.

This essay starts well and explains Functionalism clearly and accurately. The essay then drifts from its focus however and the counter-arguments of Functionalism seem to focus on methods rather than applying the key theories of Marxism and Feminism. Overall grade: ***