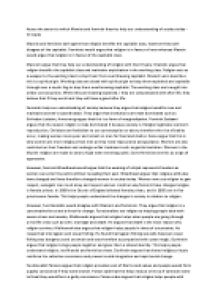 Assess the extent to which Marxist and Feminist theories help our understanding of society today - 33 marks SCLY3 BELIEFS IN SOCIETY.

Women are also restricted on their freedom and undergo unfair treatment such as genital mutation. Women in the Muslim religion are made to wear a hijab when entering public. Some feminists see this as a sign of oppression. However, feminist Woodhead would argue that the wearing of a hijab represents freedom as women can enter the public without revealing their past. Woodhead argues that religious attitudes have changed and have therefore changed women in society today. Women now use religion to gain respect, evangelic men must obey and respect women. Another way feminist have changed religion is female priests. In 1990's the Church of England allowed female priests, and in 2005 one in five priests were female. ...read more.

Durkheim argues that shared religious rituals reinforce the collective conscience and prevent social integration and rapid social change. Functionalist Parsons argues that religion provides a set of Norms and values and people would form a guilty conscience if they were broken. Parson said that this helps reduce crime as if someone were to Steal they would form a guilty conscience. Parsons also argues that religion helps people with ultimate questions such as why do the good die?. Overall, functionalists argument against Marxist and feminists accusation about religion benefitting the capitalist class is that instead religion is a force for change, not benefitting a certain class. An example of religion being a force for change in the talibanstion in Afganistan promoting change. Gramsci argues that Religion counts as a hegemony in showing oppressed people alternative ways. Marxist and feminist would strongly disagree with functionalist argument and insist that it is to benefit the ruling class. ...read more.