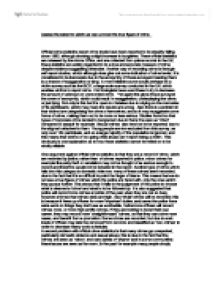 Official crime statistics report crime levels have been reported to be steadily falling since 1995, although showing a slight increase in burglaries. These official statistics are released by the Home Office, and are collected from police records in the UK, these statistics are widely regarded to be a true and accurate measure of crime, despite evidence suggesting otherwise. Another way of recording crime is through self report studies, which although does give out some indication of crime levels, it is considered to be inaccurate due to the anonymity of those surveyed meaning there is a chance of exaggeration or lying. A more reliable source would perhaps be a victim survey such as the BCS, a large scale survey conducted in the UK, which enables victims to report crime. Criminologists have used these to try to decrease the amount of unknown or unrecorded crime.  Yet again this gives those surveyed the cover of anonymity, which could result in exaggeration, underplaying the crime, or just lying. Not only is this but it is open to mistakes due to relying on the memories of its participants, which may mean the results are wrong. Also there is a problem in that victims are categorising the crimes themselves, and so it may exaggerate some forms of crime, making them out to be more or less serious. Studies found too that types of corporate crime tended to be ignored; due to there it is seen as ‘minor’ compared to assault for example. Sexual crimes also tend not to be reported; due to the stigma’s attached to them. Young people are too excluded from this survey, as only over 18’s participate, and so a large majority of the population is ignored, and this means that victims of on-going child abuse can’t report being a victim. This obviously is one explanation as to how these statistics cannot be relied on to be wholly reliable.

One argument against official crime statistics is that they are a record of crime, which are recorded by police, rather than of crimes reported to police, minor crimes for example like petty theft or vandalism may not be thought of as serious enough to record and therefore would not be included in the report. Another type of crime which falls into this category is domestic violence; many of these crimes aren’t recorded, due to the fact that it is so difficult to point the finger of blame. This means that we do not see a true figure of crimes which the police are faced with, only the ones which they pursue further. This shows that it falls to the judgement of the police to choose what is deemed a ‘crime’ and what is to be followed up. It is also suggested that police will record more crimes at points of the year when they are not so busy, however at times that crimes rates are high, less ‘trivial’ crimes will be recorded, this is because it frees up officers for more ‘important’ duties, and saves the police force extra work on things they don’t see as worthwhile, furthermore officers will record crimes more, or more high profile crimes, if they are looking to boost their own career, they may record more `straightforward` crimes, so that they can solve more cases, and benefit from a promotion. Some crimes are recorded, but due to work loads of officers may later be removed from records and classified as ‘non-crimes’ in order to decrease heavy work schedules.
A second problem with official crime statistics is that many crimes go unreported, particularly domestic violence and sexual abuse; this is due to the fact that the crimes are seen as `taboo` and carry labels of ‘shame’ and in some communities these issues are seen as the norm, in the past for example many people simply accepted domestic violence as a common part of marriage, and something that could be resolved by the couple themselves; an example of this would be the fact only recently has it been possible for a husband to be convicted of raping his wife. When the man is the victim of domestic violence too, or a child is being abused, the crimes often go unreported, due to the shame of telling, and fear of not being believed. Also minor crimes, in which the victim feels that it is not worth making a statement, they do not report it.

Gang crimes often go unreported due to the fact that they tend to take the law into their own hands, rather than seek retribution from the state, they go out and seek it directly from the perpetrator themselves, often reciprocating with a similar act of violence, which they had previously been a victim of. This is because they see their method as more effective and brings with it a higher status than reporting the crime to the authorities does. Other reasons for not reporting the police include, being scared of the person who carried out the crime, a drug dealer beating up a drug addict who has not paid him would be an example of this, the crime may be reported to other authorities, like the council, medical boards etc. or it is thought that many people do not report crimes, due to anti-police feelings. It is a well known fact that only a very small percentage of rape cases actually make it to court, even smaller is chance of a conviction. It is for this reason that victims are often very reluctant to report the crime, as the process of giving evidence and standing up in court is highly stressful, and weighed against the fact that it is unlikely to secure a conviction; it may be altogether less painful to not report it.