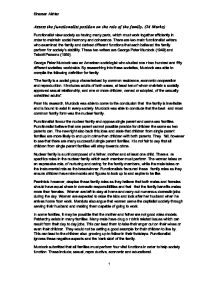 Functionalist view society as having many parts, which must work together efficiently in order to maintain social harmony and coherence. There are two main functionalist writers who examined the family and derived different functions that each believed the family perform for society’s stability. These two writers are George Peter Murdock (1949) and Talcott Parsons (1959).

George Peter Murdock was an American sociologist who studied over two hundred and fifty different societies worldwide. By researching into these societies, Murdock was able to compile the following definition for family:

“The family is a social group characterised by common residence, economic cooperation and reproduction. It includes adults of both sexes, at least two of whom maintain a socially approved sexual relationship, and one or more children, owned or adopted, of the sexually cohabited adults”.

Nuclear family is a unit composed of a father, mother and at least one child. There are specifics roles in the nuclear family which each member must perform. The woman takes on an expressive role, of nurturing and caring for the family members, while the male takes on the instrumental role as the breadwinner. Functionalists favoured these family roles as they ensure children have role models and figures to look up to and aspire to be like.

Feminists however, despise these family roles as they believe that both males and females should have equal share in domestic responsibilities and feel that the family benefits males more than females.  Women are left to stay at home and carry out numerous domestic jobs during the day. Women are expected to raise the kids and look after her husband when he arrives home from work. Marxists also argue that women serve the capitalist society through serving their husband and making them capable of going to work.

In some families, it may be possible that the mother and father are not good roles models. Patriarchy exists in many families. Many male have drug or drink related issues which can result from their day to day jobs. This can lead them to take their anger out on their wives or even their children. They would not be setting a good example for their children to live by. This can lead to the children also growing up to follow in their footsteps. Functionalist ignores these negative aspects and the ‘dark side’ of the family.

Murdock submitted that all families must perform four vital functions in order to help society function. These include; sexual, reproductive, economic and educational.

The sexual function allows the married couple to enjoy a stable sexual relationship and to avoid affairs. This will help ensure that the family unit remains intact and children can receive the love of both parents during their upbringing. This function can be criticised by stating that a stable sexual relationship does not always prevent affairs from occurring. It is also possible that despite living in a nuclear family, children do not receive the love of both parents.

According to Murdock, family allows reproduction to take place which provides the society with the next members of society. Murdock failed to realise that not all people may want or can have children.

The third function that Murdock constructed is the means of providing food and shelter for all family members. It is ideally seen as the males’ job to go out and earn the money and the females’ job to care for her husband, kids and house, which is widely criticised by feminists.

The fourth and final function that Murdock proposed was that family must provide the correct education for the children in order to ensure that they grow to become socially accepted and successful. Failure to do so could result in the children growing up to be socially excluded and possibly turning towards crime. Murdock ignored the fact that it is not only the family’s job to ensure the right education, but the child’s job to act upon it. If they decide to go against what they have been taught, then this cannot be blamed on the family as a whole.

Talcott determined that the family provides two vital functions for society, primary socialisation and stabilisation. This apposes to Murdock’s approach as he stated four vital functions.

Primary socialisation is the act of teaching children the norms and values of society. It is the parent’s responsibility to ensure that their children are brought up the right way and to prevent them from becoming corrupt. Like Murdock, Parsons also failed to recognise the child’s responsibility towards education.

This can lead to Parsons second function, stabilisation. The family provides an individual with the means of building a stable personality and relationships. The family also provides security which can help the individual cope with life in the wider society. The family is a place where the adult can relax after a hard and stressful day. The atmosphere that the family provides has been likened to a warm bath. This analogy is used to help illustrate the likeliness between family life and a bath. The family soaks away tension and stress of everyday life, the same way a hot bath provides the means of relaxation. It could be argued that the family is not necessarily like a warm bath. It is possible that the family may add to the stress of everyday life rather than free you from it.

Overall, functionalists are seen as drastically optimistic and inconsiderate of women. Murdock’s definition of family is vague and cannot be applied to all family forms. Parson’s theory also cannot be applied to all families as he only used American families in his studies. This means that his theory and concept are not universal or true for all family forms.