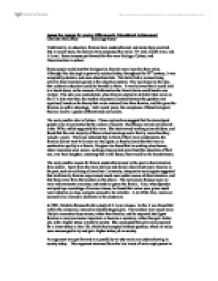 Assess the reasons for gender differences in Educational Achievement

Assess the reasons for gender differences in Educational Achievement Charlotte McCaffrey Sociology Essay Traditionally, in education, females have underachieved, and males have excelled. But in recent years, the females have surpassed the males 11+ level, GCSE level, and A Level. Some reasons put forward for this were Biology, Culture, and Discrimination in school. Some people would say that biologically, females were less able than males. Although, this ideology is generally rejected today, throughout the 20th century, it was accepted by doctors, and even educationalists. This belief led to women being actively discriminated against in the education system. This was based on the idea, that academic education could be harmful to them. It was believed that it could lead to a break down, as the amount of information the female brain could handle was limited. This idea was contradicted, when females started to do better than males in the 11+, but even then, the number of passes allocated between the genders was equalised, based on the theory that males matured later than females, and this gave the females an unfair advantage. ...read more.

In 1993, Michelle Stanworth did a study of A Level classes. In this it was found that within the classroom, interaction disadvantaged girls. The teachers were much more likely to remember boys names, rather than females, and he expected intelligent females to marry someone important, or become a secretary, rather than get a better job, with a higher status in today's society. She concluded that girls were prepared for a lower status in later life, which they accepted without question, where as males were encouraged to try and get a higher status job in society. An argument was put forward as a possibility to why males are underachieving in society today. This argument stemmed from the low levels of male employment in the 1980's, and it has been exacerbated by a decline in the demarcation lines according to gender. This argument is the "crisis of masculinity." In society today, women have a much higher status than they used to, and they are a lot more commonly the breadwinners of the household. ...read more.

Also, the leisure activities boys take part in are less conducive to educational achievement. The impact of feminism has had two effects. The first is that the government was made to introduce a legislation which provided equality in educational provision for girls. And the second was to raise the expectations and aspirations that girls had. The legislation included the sex discrimination act and consequently equality in educational provision. This means that girls are no longer excluded from some universities in the way that they were before, and they are not excluded from subjects in the same way that they were. As I mentioned earlier, subjects have also been made more "girl friendly", which is a big advantage to them. A policy known as GIST (Girls into Science and Technology) was designed, to encourage girls to choose science and technology. This policy included having visits arranged from female students, so they could act as a positive role model towards them. It also included non-sexist career advice, curriculum materials that interested females, and raising teachers' consciousness of gender role stereotyping. ...read more.