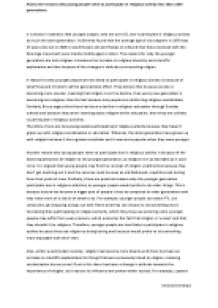 Also, within a postmodern society, religion has become more diverse and there has been an increase in scientific explanations for things that were previously linked to religion, meaning secularisation has occurred. Due to this there has been a change in attitude towards the importance of religion, as it has lost its influence and power within society. For example, Lyotard suggests that religion has lost its power to give explanations and interpretations about the world, which limits its influence over others. This means that younger people can choose their own beliefs and explanations about the world because of the growing rationalisation and religious diversity. Therefore, because religion isn?t as vital, there has been less importance placed on religion and it isn?t as necessary in today?s society. Thus, younger people don?t see the need to be religious because it doesn?t hold any importance. Whereas, older people still believe that religion is important because that was the norm in their generation. However, Davie believes that even though the younger generation aren?t participating in religious activity, this doesn?t mean that they are any less religious than previous generations because they are ?believing without belonging?. ...read more.

They are disengaged from society because they don?t have paid employment, which limits the socialisation that they have, and they face isolation because friends and family may pass away. Therefore, older people are more likely to become involved in religious activities because churches provide community and support when they might need it the most. Also, because older people are faced with death, due to declining health, then they might seek solace within religious because it provides them with insurance, comfort and support. Thus, the older generation participate in religious activity more than the younger generation because they have a greater interest in religion, because of what it provides them, than younger people. In conclusion, young people are less likely to participate in religious activity compared to the older generation because of the postmodern society, where religion has become privatised and diverse and people have become more rational. This gives the younger generation the ability to choose what specific parts of a religion they want to believe in and how they want to display their religion. Thus, their religious activity becomes privatised and specific to one action, which traditional religions don?t see as actually being religious activities. Amelia Grimshaw ...read more.