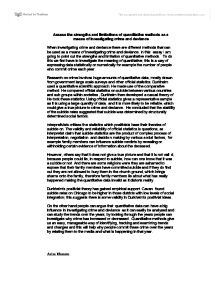 When investigating crime and deviance there are different methods that can be used as a means of investigating crime and deviance. In this essay I am going to point out the strengths and limitation of quantitative methods. To do this we first have to investigate the meaning of quantitative; this is a way of expressing data statistically or numerically for example the number of people who commit crime each year

Research on crime involves huge amounts of quantitative data, mostly drawn from government large scale surveys and other official statistics. Durkheim used a quantitative scientific approach. He made use of the comparative method. He compared official statistics on suicide between various countries and sub groups within societies, Durkheim then developed a casual theory of   He took these statistics Using official statistics gives a representative sample as it is using a large quantity of data, and it is more likely to be reliable, which could give a true picture to crime and deviance. He concluded that the stability of the suicide rates suggested that suicide was determined by structurally determined social factors.

Interpretivists critises the statistics which positivists base their theories of suicide on. The validity and reliability of official statistics is questions, as interpretist claim that suicide statistics are the product of complex process of interpretation, negotiation  and desicion making by various social factors, for example family members can influence suicide verdicts by revealing or withholding certain evidence of information about the deceased.

However, others say that it does not give a true picture and that it is not valid, because people could lie, in respect to suicide, how can one know that it was a suicide or not. And there are some religions were they are ashamed to expose that their family members have committed suicide and if they do find out they are not allowed to bury them in the church ground, which brings shame onto the family, therefore family members lie about what has really happened making the quantitative data invalid as it distorts reality.

On the other hand people can argue that quantitative data can have a big influence in investigating crime and deviance as it can easily be analysed and can study the trends over the years, by looking through the years people can investigate why crime has increased or decreased. Quantitative methods give us an easy, manageable way of identifying, tracking and examining trends and changes and this will help why people commit these crime over the years by relating them to the media and what is happening in that year.

Atkinson favoured a qualitative approach to studying the processes by the coroners socially construct suicide statistics. He carried out informal interviews with coroners and observed at inquests.

Interpretivists reject positivist explanations that look for the wider structural causes of suicide. Instead they believe sociologists should look at the micro context of suicide by studying individual meanings.

However in qualitative research produces  a mass of data, much of which will be irrelevant in terms of achieving the research objective for example with something like an interview or participant observation there is a problem of how to interpret or represent data. Qualitative data makes measuring and comparing behaviour very difficult, mainly because the data can’t be easily standardised.

In conclusion the usefulness of quantitative methods in sociological research is many however there are also advantage to it, for example quantitative data can easily be replicated giving a data a more reliable research, also many quantitative methods are done in large numbers giving a more representative data and can easily be generalised. On the other hand quantitative data lacks in validity and it does not give a true meaning and the data is hard to interpret,  so as a means of investigating crime and deviance this is really hard. In order to get an in-depth and true to life picture to the research, it is best to do triangulation; this improves validity, reliability and is more likely to be represent able. This way quantitative method could be used as a means of investigating crime and deviance, this way sociologist would be able to compare and contrast different societies and see the trend and pattern through time to time.