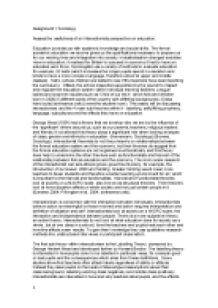 Assess the usefulness of an Interactionists perspective on education.

﻿Assignment 1 Sociology Assess the usefulness of an Interactionists perspective on education. Education provides us with academic knowledge and social skills. The formal academic education we receive gives us the qualifications necessary to prepare us for our working lives and integration into society. Industrialisation changed societies view on education, it realised for Britain to succeed in economy it had to have an educated work force. Sociologists use a variety of methods to evaluate education for example, IQ tests (which increases the longer pupils spend in education and tends to have a more complex language, therefore aimed at upper and middle classes). Sat?s, (where children are tested to see if the teachers have been teaching the curriculum). Ofsted, the school inspectors appointed by the council to inspect and regulate the education system within individual learning facilities. League tables and long term studies such as ?Child of our time?, which followed children born in 2000 in different parts of the country with differing backgrounds. (Class hand outs) (sixthsence.osfc) (www.the student room). This essay will be discussing interactionism and the 4 main sub theories within it - labelling, selfulfilling prophesy, language, subcultures and the effects they have on education. George Mead (1934) ...read more.

Cicourel and Kitsuse argued that the decision made by the councillors was unfair. Once these labels are firmly attached and for those with a negative label it may be hard to change. Rist (1977) believes the problem with labelling does not lay with known recognised bad behaviour but whether someone is going to do something about it. Lacey?s study shows how the power of labelling can actually create failure. Boys who were among 15% of pupils who had passed the 11+ to gain entry to grammar school, failed once there, due to the competitive atmosphere and use of streaming. By the second year they had become clearly anti-school as they adapted to their role as failures. A form of labelling, (this can have a positive or negative effect), is known as the Self-Fulfilling Prophecy. Where self fulfilling prophecies are used to define working class students as failures helps to ensure that they do fail. Stephen Ball?s (1981) study showed how teachers varied their expectations and teaching method depending on the band pupils were in. Studies have shown other reasons why working class pupils receive poorer results in education than children from middle class backgrounds. Interactionists Rosenthal and Jacobson (1968) ...read more.

When the positive and negative areas of studies, which have been and are being completed, are acted upon, the interactionist perspective would be the first point of reference in developing the education system with macro theories adding their experience and effective input. The interactionist perspective takes account of the importance of what happens inside schools and classrooms, rather than putting the blame for educational failure on the pupil, their family, their cultural values and attitudes or circumstances arising from their social class background. Hopefully encouraging those labelled to act positively, through hard work and academic success. An education policy which has recently been activated saw ?free schools? being opened in September 2011. These schools are all ability, state funded schools, which have been set up in response to local people?s requests to improve education for children in their area. Giving children the opportunity to learn and develop in a way that?s best for them. Free schools aim to tackle educational inequality, or marginalised groups, as over the years the gap in educational attainment between rich and poor has widened. Free schools provide teachers with more power than politicians and are more accountable to parents, this gives the school more freedom over what is taught and how students are assessed. This new system has been set up in the hope that parents and children will have more choice in the school they attend and meets their educational needs. ...read more.