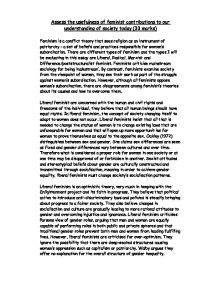 Assess the usefulness of feminist contributions to our understanding of society today (33 marks) Feminism is a conflict theory that sees religion as an instrument of patriarchy - a set of beliefs and practices responsible for women's subordination. There are different types of feminism and the types I will be evaluating in this essay are Liberal, Radical, Marxist and Difference/poststructuralist feminist. Feminists criticise mainstream sociology for being 'malestream'. By contrast, feminists examine society from the viewpoint of women, they see their work as part of the struggle against women's subordination. However, although all feminists oppose women's subordination, there are disagreements among feminist's theories about its causes and how to overcome them. Liberal feminist are concerned with the human and civil rights and freedoms of the individual, they believe that all human beings should have equal rights. In liberal feminism, the concept of society changing itself to adapt to women does not occur. Liberal feminists insist that all that is needed to change the status of women is to change existing laws that are unfavourable for women and that will open up more opportunities for women to prove themselves as equal to the opposite sex. Oakley (1972) distinguishes between sex and gender. She claims sex differences are seen as fixed and gender differences vary between cultures and over time. Therefore what is considered a proper role for women in one society or at one time may be disapproved of or forbidden in another. ...read more.

Consciousness-raising is where women share their experiences in women only groups, this way woman can see what other women face and may have the same problem and this may lead to collective action. Lastly many radical feminists argue that heterosexual relationships are inevitably oppressive because they involve 'sleeping with the enemy' and that lesbianism is the only non-oppressive form of sexuality. Radical feminist are criticized on the basis that they offer no explanation of why female subordination takes different forms in different societies. Similarly, it assumes all women are in the same position and ignores class and ethnicity. Marxist feminist see religion as another tool of women's oppression alongside capitalism and one which reinforces their social and economic status. They claim that capitalism reinforces women's inferior social status; women can provide free domestic labour (cook, clean, rear children). Capitalism benefits from this, as husbands are able to work longer hours. There is also the false belief that women will be compensated for their sufferings in heaven. This is very similar to Marx's false consciousness. For Marxist feminist, women's subordination performs a number of important functions for capitalism. Firstly, women absorb anger, Ansley (1972) describes wives as 'takers of shit' who soak up the frustration their husbands feel because of the alienation and exploitation they suffer at work. Secondly, women are a reserve army of labour that can be moved into the labour force during economic booms and out again at times of recession. ...read more.

She also argues that white, Western, middle-class women who dominate the feminist movement have falsely claimed to represent 'universal womanhood'. She further argues that feminists are wrong to believe they can adapt the Enlightenment project so that it somehow includes all women, because women are not single entities who all share the same 'essence'. Butler claims that postructuralism offers advantages for feminism, it enables feminists to 'de-construct' different discourses to reveal how they subordinate women. On the other hand, Segal criticises postructuralist feminism for abandoning any notion of real, objective social structures. Functionalism is a structural perspective that sees social order as based on value consensus and performing positive functions for society and individuals. Parsons see society as a system of interdependent parts such as sub-systems, institutions and status roles. The function of each part is to help meet the needs of the system. Individuals are integrated into the system through socialisation into the shared culture and social control, ensuring that they perform the roles expected of them. However critics argue that functionalism is a conservative ideology that neglects conflict, exploitation and change. Another conflict theory similar to feminism is Marxism. Marxism is a structural perspective that sees society as based on class conflict. In capitalism, the bourgeoisie exploit the labour of the proletariat. They maintain their position through control of the repressive state apparatus and through ideology or hegemony. However, Marx believed that ultimately, revolution leading to a classless communist society was inevitable. Marx has been criticised for being too deterministic as there are differences between Marxists. ...read more.

This is a very detailed essay with lots of really good explanations on the variety of different Feminisms. At times the paragraphs feel a little list like rather than all linking and flowing. In particular the last two paragraphs do not really link to the rest of the essay and leave the essay feeling unfinished.