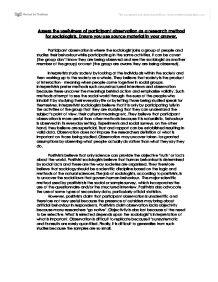 Assess the usefulness of participant observation as a research method for sociologists.

Assess the usefulness of participant observation as a research method for sociologists. Ensure you use source material in your answer. Participant observation is where the sociologist joins a group of people and studies their behaviour while participating in the same activities. It can be covert (the group don't know they are being observed and see the sociologist as another member of the group) or overt (the group are aware they are being observed). Interpretists study society by looking at the individuals within the society and then working up to the society as a whole. They believe that society is the product of interaction - meaning when people come together in social groups. Interpretivists prefer methods such as unstructured interviews and observation because these uncover the meanings behind action and emphasise validity. Such methods attempt to see the social world through the eyes of the people who inhabit it by studying their everyday life or by letting those being studied speak for themselves. Interpretivist sociologists believe that it is only by participating fully in the activities of the group that they are studying that they can understand the subject's point of view, their cultural meanings etc. ...read more.

Another study which used participant observation was James Patrick's a Glasgow gang observed. A 16 year old juvenile offender, Tim, invited James to find out what it was like to be part of the gang. James pretended to be Tim's friend and he had to change his clothes and speech to make sure that he 'looked' like part of the gang. The gang destroyed a library while James was stood on guard duty outside. This is problematic ethically as it was a criminal activity and James could have been arrested even for being on guard duty. The gang also took drugs which James had to do if he wanted to be convincing as a gang member. He also got involved with the rivalry between gangs which could have cost him his life had a serious fight broken out as the gang members tended to carry a knife. Positivists would use this study to point out the ethics involved with this type of method especially the use of deception and becoming involved with criminal activity, however, interpretivists would argue that it allowed them to get a lot of detailed information about a hard-to-reach group they would never have had access to otherwise. Today, observation tends to be used in conjunction with quantitative methods as part of a triangulation approach. Emma Kitchen ...read more.