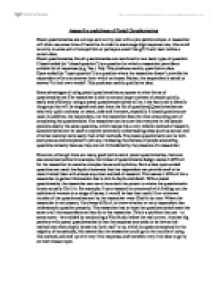 Assess the usefulness of Postal Questionnaires

Assess the usefulness of Postal Questionnaires Postal questionnaires are surveys sent out by post with a pre-paid envelope. A researcher will often use some form of incentive in order to encourage high response rate, this could be entry to some sort of competition or perhaps a small free gift if sent back before a certain date. Postal questionnaires like all questionnaires are restricted to two basic types of question: Closed-ended (or "closed question") is a question for which a researcher provides a suitable list of responses (e.g. Yes / No). This produces mainly quantitative data. Open-ended (or "open question") is a question where the researcher doesn't provide the respondent with a set answer from which to choose. Rather, the respondent is asked to answer "in their own words". This produces mainly qualitative data. Some advantages of using postal questionnaires as oppose to other forms of questionnaire are: The researcher is able to contact large numbers of people quickly, easily and efficiently using a postal questionnaire (since all he / she has to do is identify the group that will be targeted and post them the list of questions).Questionnaires are relatively quick and easy to create, code and interpret, especially if closed questions are used. ...read more.

Another big problem with postal questionnaires is that the response rate tends to be low as this method can often simply be seen as 'junk mail' to us, which is a great annoyance for the majority of households, this means that the researcher could go to the trouble of using this method, and end up with very little response, and therefore very little data to go by on their chosen topic. Looking at the kinds of data most questionnaires produce it is safe to say that positivists prefer postal questionnaires as they like data that can be put into statistics and charts, in oppose to lengthy qualitative data which is more about people and their own feelings about things. Postal questionnaires containing 'closed' questions are ideal for scientific purposes. They are quick and cheap. The sample can be controlled to achieve representation, the data is easy to use as it is generally very simple, and the findings can be analysed statistically and generalised. There is no possible confusion in the data and therefore it is more straightforward to draw conclusions. Postal questionnaires are also seen to be very reliable as no matter how many times you repeat the survey the questions are all the same so you will generally receive the same data with only small differences depending on more personal factors. ...read more.

as the group being researched are usually in an environment comfortable and known to them, meaning it is more likely they will be themselves, but this can also depend on the other people around them, also the group are allowed to speak for themselves in front of the participant observer, meaning the researcher can achieve verstehen. Using official statistics may actually be a better way of researching when compared with postal questionnaires due to things like response rates and some lack of validity; if a researcher used official stats they would be gaining very valid data in an less time consuming way (if postal questionnaires can be called time consuming at all.). Also they would be saving the small amount of money spent on the pre-paid envelopes. Based on this evidence, it can be concluded that whilst postal questionnaires have high reliability as well as being very popular with positivists for producing quantitative data when in closed question form, it can also be said that this method may not be for everyone, especially if a researcher wants proper in depth data, when most people filling in these questionnaires probably would not be bothered to write long answers, and much of them time they may not even bother to send back their response once they have filled the questionnaire in. ...read more.