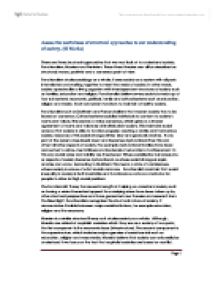 Assess the usefulness of structural approaches to our understanding of society.

Assess the usefulness of structural approaches to our understanding of society. (40 Marks) There are three structural approaches that we must look at to understand society, Functionalism, Marxism and Feminism. These three theories can all be described as structural, macro, positivist and a consensus point of view. Functionalism studies sociology as a whole. It sees society as a system with all parts inter-related and working together to meet the needs of society. In other words, society operates like a living organism with interdependent structures of society such as families, education and religion. Functionalists believe every society is made up of four sub-systems: economic, political, family and cultural systems such as education, religion and media. Each sub-system functions to maintain a healthy society. Functionalists such as Durkheim and Parsons believe that modern society has to be based on consensus. Cultural systems socialise individuals to conform to society's norms and values. This creates a value consensus, which gives us a shared agreement of norms and values by all individuals in society. This maintains social order so that society is able to function properly; creating a stable and harmonious society, because of this social change will be slow and gradually evolves. If one part of the system does break down and becomes dysfunctional then this can affect all other aspects of society. ...read more.

People become alienated from their natural talents as they engage in routine work that undermined their creativity and individuality. Classical Marxists would argue that conflict will continue between the two classes unless the working classes unite and gain class consciousness and become a class for itself, and eventually overthrow the ruling class in a revolution. Marxists believe that because the ruling class control the superstructure, the working class are subject to ideological conditioning. Therefore the working class are in a state of false class consciousness which means they are not aware of the full extent of their exploitation. This is known as 'hegemony' according to Gramsci. The Marxist theory has several strengths in helping us understand society such as having a wider theoretical appeal. It has been a major influence on other social theories such as Weberian sociology (Max Weber) and Feminism. It offers a structural approach which emphasises the importance of the economy in modern society and links the major social institutions together. Marxism argues that the various parts of society are inter-related and affect one another. Marxism accounts for the revolutionary upheaval as societies go through large-scale change. Since people make society, only people can change society. Therefore although people are now 'puppets of capitalism' they will eventually rise up and overthrow this oppressive regime. ...read more.

They think in the same way as Marxists as they recognise structures in society. Feminism emphasises the conflict between men and women. Feminism doesn't just have on theory; it has a number of branches which all have particular strength. For example Marx Feminists link class and gender; Radical Feminists look at exploitation of women through patriarchy. As some of the feminist methodology is interpretivist they can often uncover findings high in validity. For example Dobash and Dobash's research into domestic violence used unstructured interviews and gave them a valid insight into the experiences of abused women. In conclusion, it is useful to look at the structural approaches in order to understand society but each can be easily criticised and each has their own downfalls. For example, Functionalists tend to over-emphasise the harmonious nature of society and fails to see that some groups are disadvantaged by society. Competing sociologists maintain conflict occurs between many social groups in society e.g. the working and middle classes. Marxism has been criticised by functionalists for over-emphasising conflict in society. It is evident that in order for society to work there must be harmony and shared values according to the functionalist view. Feminism can be criticised for being ideological and biased. By focussing on patriarchy feminists ignore the fact that men are also these days used for domestic labour and that women are becoming increasingly independent. ?? ?? ?? ?? Page 1 ...read more.