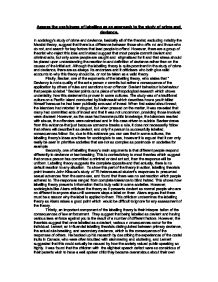 Assess the usefulness of labelling as an approach to the study of crime and deviance. In sociology's study of crime and deviance, basically all of the theorist, excluding notably the Marxist theory, suggest that there is a difference between those who offend and those who do not, and search for key factors that lead people to offend. However, there are a group of theorist who reject this idea and instead suggest that most people commit deviant and criminal acts, but only some people are caught and stigmatised for it and that stress should be placed upon understanding the reaction to and definition of deviance rather than on the causes of the initial act. Although the labelling theory is quite prominent in the study of crime and deviance, there are as always its endorsers and it criticisers who both give valid accounts to why this theory should be, or not be taken as a valid theory. Firstly, Becker, one of the exponents of the labelling theory, who states that " Deviancy is not a quality of the act a person commits but rather a consequence of the application by others of rules and sanctions to an offender. ...read more.

Secondly, one of labelling theory's main arguments is that different people respond differently to deviance or law breaking. This is contradictory to most theories which suggest that once a person has committed a criminal or deviant act, then the response will be uniform. Labelling theory suggests the complete opposite and that actually, there is no default reaction to any situation. To show this part of the theory in action, labelling theorists point towards John Kitsuse's study of 75 heterosexual student's responses to presumed sexual advances from the same sex, and found that there was no set reaction which people adhered to. The responses ranged from complete tolerance to blind hatred. This shows how labelling theory presents information that is truly valid in some societies. However, sociologists like Akers criticised the theory as it presents deviant as normal people who are no different to anyone else until someone slaps a label on them. Akers argues that there must be a reason why the label is applied to them. This criticism undermines the labelling theory as Akers raises a good point which would be difficult to ignore for any assessment of the theory. ...read more.