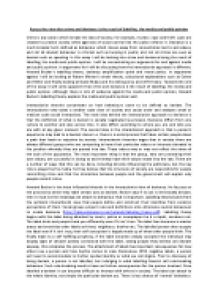 Assess the view that crime and deviance is the result of labelling, the media and public opinion

For Merton, crime and deviance were evidence of a poor fit (or a strain) between the socially accepted goals of society and the socially approved means of obtaining those desired goals, the resulting strain leading to deviance. Merton argued that all societies set their members certain goals and, at the same time, provide socially approved ways of achieving these goals; he pointed out that, in a stratified society, the goals were linked to a person?s position in the social structure. Those lower down had restricted goals. The system worked well as long as there was a reasonable chance that a majority of people were able to achieve their goals. However, if the majority of the population were unable to achieve the socially set goals, then they become dissatisfied with society and looked for an alternative which is often deviant. Merton uses Durkheim?s term anomie to describe this situation. The five following different forms of behaviour could then be understood as a strain between goals: Conformity is where the individual continues to adhere to both goals and means, despite the limited likelihood of success. Innovation is where the person accepts the goals of society but uses different ways to achieve these goals; criminal behaviour is included in this response. Next is ritualism this is when the means are used by the individual, but sight of the actual goal is lost. Retreatism is where the individual rejects both the goals and means, the person dependent upon drugs or alcohol is included in this form of behaviour. Finally is rebellion where both the socially sanctioned goals and means are rejected and different ones are substituted. Writing in the 1950?s, Albert Cohen agreed with Merton and drew upon his ideas of strain and also that there is a working class phenomenon. Cohen was particularly interested in the fact that much offending behaviour was not economically motivated, but simply done for the thrill of the act. ...read more.

They both have their weaknesses but overall I think the interactionist approach is better. In this essay I have not only looked at the arguments for the media and public opinion but also against, as not all theorists agree with each other. In the arguments for, Howard Becker he focuses on the process by which they label certain acts as deviant and that if no act is intrinsically deviant, then it must be the meanings we attach to behaviour that is important. I then went on to look at the deviancy amplification spiral where on some occasions the reporting of crime by the media can create more deviance, and then on to moral panics where I looked at the real life example of the ?Mods? and ?Rockers?. In the arguments against, Robert Merton focuses on crime and deviance where evidence of a poor fit (or a strain) between the socially accepted goals of society and the socially approved means of obtaining those desired goals, where the resulting strain leading to deviance. Other theories I looked into were: Cohen, Cloward and Ohlin, Miller and Matza and the delinquency drift. Considering the arguments and evidence put across I believe that crime is the result of the media and public opinion. As we all know today, that media and public opinion plays a massive role in society when it comes to crime and deviance and its becoming more and more common to see that most crimes are not always from the lower or working classes as suggested by the subcultural theories of crime. While the interactionist explanations look more at the individual rather than a culture or class, and that individuals are getting labelled for their deviant behaviour. The interactionist approach then goes on to give us two explanations for this: the deviancy amplification spiral and moral panics. So this suggests that the media makes us create an opinion about an individual, which in the long run will become internalised. ...read more.