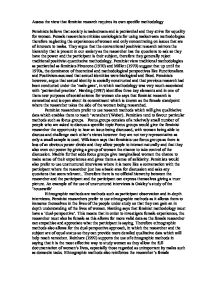 Assess the view that feminist research requires its own specific methodology

Assess the view that feminist research requires its own specific methodology Feminists believe that society is malestream and is patriarchal and they strive for equality for women. Female researchers criticise sociologists for using malestream methodologies therefore neglecting the experiences of women and only concentrating on issues that are of interests to males. They argue that the conventional positivist research mirrors the hierarchy that is present in our society as the researcher has the questions to ask so they have the power and the participant is their subject, therefore they generally reject traditional positivist-quantitative methodology. Feminist view traditional methodologies as patriarchal as feminists Firestone (1970) and Millett (1970) suggest that up until the 1970s, the dominance of theoretical and methodological perspectives like Functionalism and Positivism assumed that sexual identities were biological and fixed. Feminists however, argue that sexual identity is socially constructed and that previous research had been conducted under the 'male gaze', in which methodology was very much associated with 'patriarchal practice'. Harding (1987) identifies three key elements and in one of them new purposes of social science for women she says that feminist research is ...read more.

Harding says that feminist methodology must have a 'dual-perspective'. This means that in order to investigate female experiences, the researcher must also be female as this allows for more valid data as the female researcher can empathise and appreciate what the participant is saying. Therefore ethnographic methods also allows for the dual-perspective approach, in which the researcher and the subject are of equal status so they can provide more detailed qualitative data which will help reach verstehen. Reinharz (1992) supports the use of ethnographic methods in saying that it is the most effective way to study women as they allow the full documentation of women's lives, especially those regarded as unimportant by males such as domestic tasks. Ethnographic methods also reinforces the researcher's female standpoint commitment as the ethnographic methods such as in-depth interviews will allow the researcher to empathise with the female participant therefore taking their side. Ethnographic methods would be useful for studying issues that women face of family ideology in practice such as the 'new momism' ideology and the pressures that women face in the family. ...read more.

Oakley sees the total rejection of quantitative methods is harming feminist research. Oakley (1981) argues that traditional structured interviews where she views them as exploitative as they offer the interviewee nothing in exchange for their information and reflect power imbalance between interviewer and interviewee. However Oakley believes that in order to to get access to the prestige, funding and influence of government policy to bring about equality for women which would be very difficult to achieve using ethnographic methods. Feminists must use both quantitative and qualitative methods in their research. In conclusion, feminists are very open about reaching the feminist standpoint to ensure equality for women and the ethnographic methods allow women to express themselves providing rich valid data. However this leaves room for criticisms by positivist sociologists who argue that feminist methodology lacks in reliability and is not representativeness. As Oakley has said if feminists want to access the same status of traditional research then they must either adapt the traditional methodology or use both quantitative and qualitative methods. Feminist methodology could use triangulation methods to strive for equality for women. ...read more.