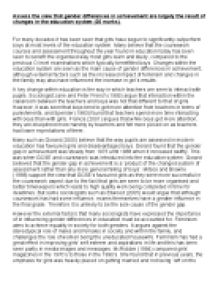 ﻿Assess the view that gender differences in achievement are largely the result of changes in the education system (20 marks). For many decades it has been seen that girls have begun to significantly outperform boys at most levels of the education system. Many believe that the coursework courses and assessment throughout the year found in education today has been seen to benefit the organised way most girls learn and study, compared to the previous O level examinations which typically benefitted boys. Changes within the education system are seen as the main cause of gender differences in achievement, although external factors such as the increased impact of feminism and changes in the family may also have influenced the increase in girl?s results. A key change within education is the way in which teachers are seen to interact with pupils. Sociologist Jane and Peter French (1993) argue that interaction within the classroom between the teachers and boys was not that different to that of girls. ...read more.

But some sociologists such as Ellwood (2005) would argue that although coursework has had some influence, exams themselves have a greater influence in the final grade. Therefore it is unlikely to be the sole cause of the gender gap. However the external factors that many sociologists have expressed the importance of in influencing gender differences in education must be accounted for. Feminism aims to achieve equality in society for both genders. It argues against the stereotypical role of males and females in society and within the family, and challenges the role of women being the uneducated housewife. Feminism has had a great effect in improving girls? self-esteem and aspirations in life and this has been seen partly in media images and messages. McRobbie (1994) compared girls? magazines in the 1970?s to those in the 1990?s. She found that in previous years, the emphasis for girls was heavily placed on getting married and not being ?left on the shelf?. ...read more.

Therefore this could have led to the dismissal of schoolwork by boys, resulting to lower achievement levels and gender differences in grades achieved. In conclusion, the gender differences within education are a result of changes within the education system, however it may also be seen that both internal and external factors influence educational achievement of both genders. Girls may be improving at a quicker rate than boys but the performance of both sexes has improved considerably in recent years. Although boys may now be seen to be lagging behind girls, boys today are achieving more than they did in the past. Also, social status must be accounted for as both genders of the same social class will tend to achieve fairly similar results, whereas a boy from the middle class will tend to achieve higher than a girl from a working class background. Although gender does have a large influence on educational achievement, we must not exclude external impacts. ...read more.