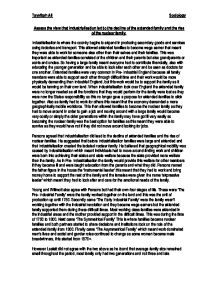 Assess the view that Industrialisation led to the decline of the extended family and the rise of the nuclear family.

Assess the view that Industrialisation led to the decline of the extended family and the rise of the nuclear family. Industrialisation is where the country begins to expand in producing secondary goods and services using factories and transport. This allowed extended families to become wage earner that meant they were able to work for someone else other than their selves and their families. This was important as extended families consisted of the children and their parents but also grandparents or aunts and uncles. So having a large family meant everyone had to contribute financially, also with educating the younger generation and be able to look after each other and be seen as doctors for one another. Extended families were very common in Pre- Industrial England because all family members were able to support each other through difficult time and their work would be more physically demanding than Industrial England, but this work would be to support the family as it would be farming on their own land. ...read more.

He believed that geographical mobility was caused by Industrialisation which meant individuals had to move around finding work and children were born into achieving their status and state welfare because the state provided more welfare than the family. As in Pre- Industrialisation the family would provide this welfare for other members if they became ill and were taught education from the parents and what they did. Parsons named the father figure in the house the 'instrumental leader' this meant that they had to work and bring money home to support the rest of the family and the females were given the name 'expressive leader' which meant they had to look after and care for the emotional needs of the family. Young and Willmott also agree with Parsons but had their own four stages of life. These were 'The Pre- Industrial Family' were the family worked together on the land and this was the unit of production up until 1750. ...read more.

This made is more believable and he carried out research through a long period of time and this therefore may have been the correct information. Anderson based his research in the 1851 census on the town of Preston. He found that during early Industrial families they were not extended. He disagreed with Parsons view that the extended unit had been replaced by the nuclear family. This is because large number of households, he found to have shared extended kin. He found these extended kin are s mutual support system in a town where unemployment and poverty were high. In conclusion I think that during Pre- Industrial England that they was a mix of nuclear and extended families, but as Industrialisation came into place, families became more nuclear as geographical mobility was a big part of them living a good life so it was better suited in a nuclear family to move around as having a large family would increase stress and may have been financially straining. ?? ?? ?? ?? Tayyibah Ali Sociology ...read more.