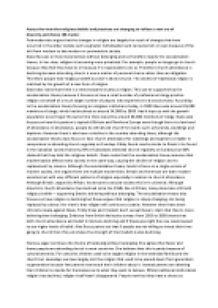 ﻿Assess the view that religious beliefs and practices are changing to reflect a new era of diversity and choice (33 marks) Postmodernists argue that the changes in religion are largely the result of changes that have occurred in the wider society such as greater individualism and consumerism or even because of the shit from modern to late modern or postmodern society. Davie focuses on how many believe without belonging and so therefore rejects the secularisation theory. In her view, religion is becoming more privatised. For example, people no longer go to church because they feel they have to or because it?s respectable to do so. Therefore church attendance is declining because attending church is now a matter of personal choice rather than an obligation. Therefore people hold religious beliefs but don?t attend church. The decline of traditional religion is matched by the growth of a new form of religion. Davie also notes that there is a trend towards vicarious religion. This can be supported by the secularisation theory because it focuses on how a small number of professional clergy practise religion on behalf of a much larger number of people, who experience it at second hand. According to the secularisation theory focusing on religious institutions today, in 1900 there was around 45,000 members of clergy, which had declined to around 34,000 by 2000. ...read more.

Postmodern society also involves the growth of consumerism and especially the idea that we now construct our identities through what we choose to consume. This links in with the spiritual shoppers because we can now pick and mix elements of different faiths to suit our tastes and make them part of our identity. Therefore in Lyon?s view, religion has relocated to the sphere of consumption. Whilst there may be a decline in the number of people belonging to religious organisations, they haven?t abandoned religion. Instead they have become religious consumers. One effect of having a great variety of religious products to choose from is a loss of faith in meta-narratives ? where there?s many different religions claiming to hold the monopoly of truth. Lyon criticises the secularisation theory for assuming that religion is declining and has now been replaced by a rational, scientific worldview. Although Weber focuses on disenchantment and rationalisation, Lyon focuses on re-enchantment. He agrees that traditional religions have declined but points to the growing strength of non-traditional religion in the West and its recovery elsewhere in the world. Postmodernists claim that the growth of religious media and the electronic church as evidence against secularisation however research shows that people choose to view programmes that confirm their existing beliefs. ...read more.

In Western Europe, the trend is towards increasing secularisation and Norris and Inglehart argue that this isn?t surprising because these societies are among the most equal and secure in the world with well-developed welfare states offering comprehensive health care, social services and pensions. This reduces poverty and protects those at the bottom from insecurity. Although America is more religious than Europe, this is explained by Norris and Inglehart?s general theory of religiosity as the result of insecurity. E.g. they point out that although America is religious by the standards of other rich nations, it?s less religious than poor ones. Norris and Inglehart?s argument is supported by Gill and Lundegaarde who found that the more a country spends on welfare, the lower the levels of religious participation. European countries that spend more than the USA, are also more secular than the USA. Vasquez accepts that Norris and Inglehart?s offer is a valuable explanation of different levels of religious participation not only in Europe and the USA but globally. However he makes two criticisms. Firstly they only use quantitative data about the income levels; they don?t examine people?s own definitions of existential security. He argues qualitative data is also required. He also argues that Norris and Inglehart only see religion as a negative response to deprivation. They ignore the positive reasons people have for religious participation and the appeal that some types of religion have for the wealth. ...read more.