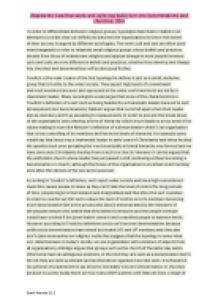 Assess the view that sects and cults inevitably turn into denominations and churches. 33m

﻿Assess the view that sects and cults inevitably turn into denominations and churches. 33m In order to differentiate between religious groups, typologies have been created in an attempt to provide clear cut definitions between the organisations however the extent of their success is argued by different sociologists. The terms cult and sect are often used interchangeably to refer to relatively small religious groups whose beliefs and practices deviate from those of mainstream religions and appear strange to most people however sects and cults are very different in beliefs and practices, whether they develop and change into churches and denominations will be discussed further. Troeltch is the main creator of the first typology he defines a sect as a small, exclusive group that is hostile to the wider society. They expect high levels of commitment and most members are poor and oppressed in the wider world and most are led by a charismatic leader. Many sociologists would argue that some of the characteristics in Troeltch?s definition of a sect such as being headed by a charismatic leader have led to sect development into denominations; Niebuhr argues that sects fall apart when their leader dies as members aren?t as accepting to replacements. In order to prevent the break-down of the organisation sects develop a form of hierarchy which it turn leads to a loss some of its values making it more like Niebuhr?s definition of a denomination which is an organisation that is less controlling of its members and has more levels of hierarchy. ...read more.

Also 2nd generation individuals lack commitment to rules organisations have so rules start breaking down, schisms occur as some of the sect want to evolve and dilute and some are fundamentalist, so breakaways occur for example The Armish (the fundamentalists) are a break away from the Quakers (a denomination). Stark and Bainbridge agree with the idea that sect become denominations due to schisms however they argue that schisms are due to other reasons. Stark and Bainbridge argue sects always start as a schism between the needs of the deprived and the needs of the privileged, this schism causes a sectarian break away headed by a charismatic leader finally a denominalisation occurs as a result of the protestant ethic effect rules, regulations and commitment of the sect adapt so that it can exist alongside society helping it grow and become more successful however this causes another schism starting the cycle again. However weber would argue that this cycle just turns churches to denominations rather than turn sects into denominations. He argues that the church only represents the privileged and powerful so people without feel unrepresented causing a schism and a formation of a break away sects, church membership therefore declines and the church becomes a denomination. Wallis would argue against Troeltch and Niebuhr?s definitions of churches, sect and denominations, he believes the only way to distinguish types of organisations is by looking at their relationship to the wider society he therefore he identifies 3 types of new religious movements the first are world rejecting new religious movements. ...read more.

expansion therefore they aim to gain new members and in the process become more diluted for the customer making them more denomination-like in values however Bruce would argue that cults don?t turn into denominations and churches but rather offer an alternative to them. He argues that as society becomes more diverse we have more choice and freedoms in mainstream life, cults are a consequence of this; cults help us cope with choices we have and create stability. Different cults help us cope with different choices for example weight watchers help us chose a healthy lifestyle and are a consequence of modern day obesity. In conclusion the idea that sect and cults inevitably turn into denominations and churches is an out-dated one that applies more in a modern society, where we there isn?t much diversity within religious organisations however society has now becomes more post- modern we are seeing hybridity and a pick and mix of features from all organisations. A loss of faith in science and detraditionalisation has made it more than likely that we see churches and denominations becoming more like cults in order to prevent their death for example churches have already become more like audience cults by having god channels on television and advertising on social media such as Facebook, a change in values and the development of choice has meant people don?t have to rely on traditional forms of spirituality and are focusing more on self-spirituality which if forcing churches to change instead. Dami Amode 13.1 ...read more.