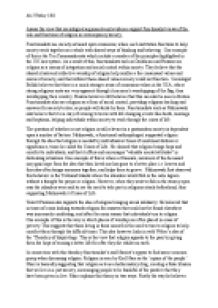 ﻿Abi Whitley 13SS Assess the view that sociological arguments and evidence support functionalist views of the role and functions of religion in contemporary society. Functionalists see society as based upon consensus, where each institution functions to help society work together as a whole with shared ways of thinking and behaving. One example of this is the Ten Commandments which include a number of the principles highlighted in the U.K law system. As a result of this, functionalists such as Durkheim and Parsons see religion as a means of integration and social control within society. They believe that the shared rituals and collective worship of religion help reinforce the consensual values and norms of society, and that without these shared values society could not function. Sociologist Bellah believes that there is a much stronger sense of consensus values in the USA, where strong religious roots are very apparent through American?s worshipping of the flag, thus worshipping their country. Parsons however still believes that this can also be seen in Britain. Functionalists also see religion as a form of social control, providing religious backing and answers for society's rules, so people will abide by them. Functionalists such as Malinowski also believe that it is a way of coming to terms with life changing events like death, marriage and baptisms, helping individuals within society to work through the crises of life. ...read more.

Otto Maduro is a modern Neo-Marxist who believes that is actually possible for religion to play a larger role in the political struggles of the oppressed classes, Maduro has studied developing countries where religion is a dominating part of society, he saw that social liberation cannot take place unless change within the churches took place. This is the idea of Liberation Theology, where the oppressed take their problems to the church as then the church can support them in this by bringing about a change. This theology supports Gramsci through the idea that religion is able to support the rights of the working classes and illustrate where they actually stand within society. Emile Durkheim however, believed that in worshipping religion, it is actually society that is being worshipped. When talking about Aboriginal religion, Durkheim concluded that ?primitive man comes to view society as something sacred because he is utterly dependent upon it.? This is a particularly interesting stance of religion and relates to the way in which Aboriginal societies would each make their own totem pole, used to worship their Aboriginal God. Durkheim believed that the Totems were also regarded as something entirely sacred, and were in fact a means of worshiping their society also. ...read more.

Over the years, religion has adapted a great amount, but with this functional views have also improved and adapted. As Durkheim talks about the ?cult of man? functionalists see society as becoming far more individualistic, and that in the future we will live in a far more complex society with a rapidly declining collective conscience. Living in such a diverse and fragmented society, it is possible that when given the choice, as a society we may chose not to participate in a common religion, but to embrace the fact that as Bruce suggests, we live in a consumerist society in which we are free to ?pick and choose? religion. However, despite this, even in this post-modern society in which we live, religion is still an evident part of life for many. For instance, Islam is the world?s fastest growing religion, and denominations of the Christian faith such as the Salvation Army still have a great number of followers, whose work benefits many of disprivileged individuals across Britain. In conclusion, I believe that it is clear that in contemporary society, religion is about choice, choice as to whether or not you want to believe in a faith. In a society where free will is so liberally carried out, I believe that there is no reason as to why religion should not be seen as functional for its believers. ...read more.