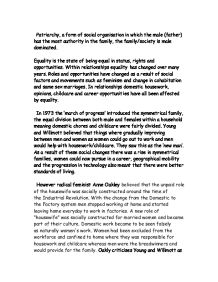 Assess the view that the family is patriarchal.

Patriarchy, a form of social organisation in which the male (father) has the most authority in the family, the family/society is male dominated. Equality is the state of being equal in status, rights and opportunities. Within relationships equality has changed over many years. Roles and opportunities have changed as a result of social factors and movements such as feminism and change in cohabitation and same sex marriages. In relationships domestic housework, opinions, childcare and career opportunities have all been affected by equality. In 1973 the 'march of progress' introduced the symmetrical family, the equal division between both male and females within a household meaning domestic chores and childcare were fairly divided. Young and Willmott believed that things where gradually improving between men and women as women could go out to work and men would help with housework/childcare. ...read more.

Oakly criticises Young and Willmott as she believes that there is evidence that the claims they have made have been exaggerated and in fact her view is that things are not becoming more equal between men and women which was backed up when Mary Boulton found out that fewer than 20% of husbands had a major role in childcare. In contrast to Willmott and Young, Oakley claims that the division of labour within families remains unequal with the burden of domestic work still falling on women even when they are also in paid employment. This is referred to as the "double" or "dual burden" which benefit men as this means the family is still patriarchal. In 1999 Gillian Dunne conducted a case study of the division of labour in 37 cohabiting lesbians households, this was found to be very different to the division labour previously found in nuclear households which ...read more.

Although the socially constricted norms of women doing the triple shift has not completely changed as women are still expected to do the majority as it as seen to be in their nature. Also this gender scripted assumption has added extra pressure to marriages as a result of men thinking their wives are suppose to do the housework etc. and this has lead to the increase in divorce and also domestic violence within couples. In conclusion the result of change in generation and evidence over the last 50 years has shown the changes such as the march of progress and the patriarchal family were the male is dominant has changed as a lot as women have become more equal within society and so although men and women are not completely equal there is enough evidence to show that the family and roles of men and women is changing and has changed over time so the family is no longer patriarchal. ...read more.