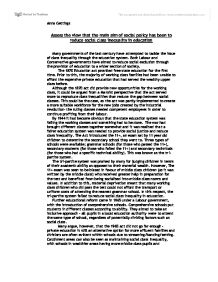 Assess the view that the main aim of social policy has been to reduce social class inequality in education Many governments of the last century have attempted to tackle the issue of class inequality through the education system. Both Labour and Conservative governments have aimed to reduce social exclusion through the provision of education to a wider section of society. The 1870 Education act provided free state education for the first time. Prior to this, the majority of working class families had been unable to afford the expensive private education that had served the wealthy upper class before. Although the 1870 act did provide new opportunities for the working class, it could be argued from a Marxist perspective that the act served more to reproduce class inequalities than reduce the gap between social classes. This could be the case, as the act was partly implemented to create a more suitable workforce for the new jobs created by the industrial revolution- the ruling classes needed competent employees in order to continue profiting from their labour. ...read more.

who received greater help in preparation for the test and benefited from being socialised into middle class norms and values. In addition to this, material deprivation meant that many working class children who did pass the test could not afford the transport or uniform costs of attending the nearest grammar school. In this respect, the tri-partite system failed to reduce social class inequality in education. Further educational reform came in 1965 under a Labour government, with the introduction of comprehensive schools. Comprehensive schools put students in different classes according to ability. They aimed to take an inclusive approach - all pupils in a local education authority were to attend the same type of school, regardless of potentially dividing factors such as social class. Many argue, however, that the 1965 act did not go far enough- private education is still an alternative option for more affluent families and divisions are often evident within schools due to streaming/banding/setting. ...read more.

Educational Maintenance Allowance (EMA) is a form of compensatory education designed to try and persuade more working class pupils to remain in school after 16. Up to �30 a week can be awarded to students from low income families, supposedly to be spend on educational resources, transport, lunches etc. Critics of EMA argue that the government use it as a way of reducing unemployment statistics by encouraging more young people into further education. There is also no control on how students spend the allowance, which could mean that it may not benefit their education anyway. All in all, there have been a number of changes to the British education system. Many have been instrumental in creating a more meritocratic society, although it can be argued that not all were in the best interests of working class students. However, it cannot be denied that the last century has seen a huge shift away from the educational system of the 19th century which only benefited the richest in society. ?? ?? ?? ?? Anna Gettings ...read more.