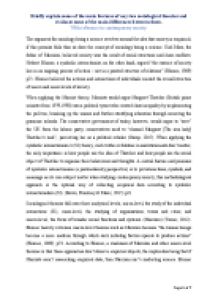 ﻿Briefly explain some of the main features of any two sociological theories and evaluate some of the main differences between them. With reference to contemporary society. The argument for sociology being a science revolves around the idea that society is empirical; if this premise fails then so does the concept of sociology being a science. Karl Marx, the father of Marxism, believed society was the result of social structures and class conflicts. Herbert Blumer, a symbolic interactionist, on the other hand, argued ?the essence of society lies in an ongoing process of action ? not in a posited structure of relations? (Blumer, 1969) p71. Blumer believed the actions and interactions of individuals created the overall structure of macro and meso levels of society. When applying the Marxist theory, Marxists would argue Margaret Thatcher (British prime minister from 1979-1990) was a political tyrant who created class inequality by implementing the poll tax, breaking up the unions and further stratifying education through removing the grammar schools. The conservative government of today, however, would argue to ?save? the UK from the labour party, conservatives need to ?channel Margaret [The iron lady] Thatcher?s zeal?, perceiving her as a political scholar (Gamp, 2017). When applying the symbolic interactionism?s (SI) theory, such truths or falsities in said statements don?t matter; the only importance is how people use the idea of Thatcher and how people use the social object of Thatcher to organise their behaviours and thoughts. ...read more.

Marxism’s conflict analyses focus on class conflict through the economic system of capitalism. Karl Marx believed there were two classes of individuals in society, the power class “bourgeoisie” who owned the factories and means of making money and the powerless class, “proletarian”, who were exploited by the power class and manipulated through means of social structures. (Bown, Pountney & Maric 2016) p43. Marx believed a revolution would occur where the proletariat would overthrow the bourgeoisie and that social conflict was the only means for change. A conflict theory like Marxism is the belief that all social change occurs because of an unbalance in society, unequal distribution of a resource. (Turner, 2014) p32. Marxism’s direct focus on social structures and class conflict is the main difference between it and symbolic interactionalism and is also a significant weakness of SI when applying the perspective to explain and understand contemporary social life because SI neglects social structures altogether. Bown, et al… (2016) p57 state “both functionalists and Marxists criticise interactionism for neglecting social structures which they argue impact directly on people’s lives”. For example, in the UK, aspiring 16-year old’s can now apply to become “apprentice sandwich artists” at Subway which will give them the privilege to work for £3.50 while performing the same unskilled functions of an ordinary worker at minimum wage (£7.50). ...read more.