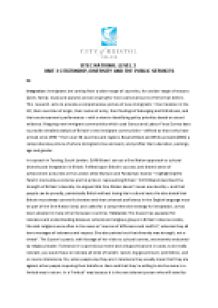 ﻿BTEC NATIONAL LEVEL 3 UNIT 3 CITIZENSHIP, DIVERSITY AND THE PUBLIC SERVICES P2 Integration: immigrants are coming from a wider range of countries, for a wider range of reasons (work, family, study and asylum) and are staying for more varied amounts of time than before. This research aims to provide a comprehensive picture of new immigrants ? their location in the UK, their countries of origin, their routes of entry, their feelings of belonging and Britishness, and their socio-economic performance ? with a view to identifying policy priorities based on sound evidence. Mapping new immigrant communities which used Census and Labour Force Survey data to provide detailed analysis of Britain?s new immigrant communities ? defined as those who have arrived since 1990 ? from over 50 countries and regions. Beyond Black and White presents(BBC) a comprehensive picture of where immigrants live and work, and profiles their education, earnings, age and gender. In a speech in Tooting, South London, Ed Miliband set out a One Nation approach to cultural diversity and integration in Britain. Reflecting on Britain?s success, and shared sense of achievement and pride at the London 2012 Olympic and Paralympic Games ? highlighting Mo Farah?s momentous victories and his pride in representing Britain ? Ed Miliband described the strength of Britain?s diversity. He argued that One Nation doesn?t mean one identity ? and that people can be proudly, patriotically British without losing their cultural roots.He also stated that Britain must always control its borders ...read more.

The important thing about rights is that they apply to everyone and can?t be taken away, however horrible someone is, and regardless of what they?ve done wrong. Here are some examples; the right to freedom of speech, the right to a free and fair trial in a court of law, the right not be enslaved or tortured, the right to protest or assemble peacefully with others. Some rights are more important than others, for example, the right to life because very few people want their life to be ended by someone else. You can see one of the first problems with rights here, though, as many countries, such as the USA, still have the death penalty where someone does have the (legal not necessarily moral) right to take your life. Equal opportunities and positive action: this EqualOpportunities (also called the Equality) has been written in accordance with current best practice and has been drafted in line with the Equality Act 2010. Under the Equality Act 2010, employers may utilize positive action in recruitment and promotion. ?Positive action? means the steps that an employer can take to encourage people from groups with different needs or with a past record of disadvantage or low participation, to apply for jobs. Employers are permitted, not required, to take positive action. One of the conditions of the positive action provisions is that employers must not routinely treat people with a protected characteristic more favourably: it must be used only in tie-break situations. ...read more.

Volunteers are good citizens for the simple reason that they give back to the community without taking anything away. Many people say that they enjoy the work they do - but it can still often be tough going. Think of people who man the phone lines at organisations such as the Samaritans - it can be thankless and heartrending work at times, but these people add an invaluable service to our community. Of course, not all jobs which are for the greater good of the community can be carried out through volunteering. Many people who are employed in public service can also be described as good citizens for their hard and selfless work for the greater good of others. Doctors who perform delicate and virtually miraculous operations on a daily basis are good citizens, as are the nurses who tend their patients. But more than this - the people who truly have thankless jobs. The people who clean our schools and hospitals and those who cook food for elderly people -without whom, they would not see anyone else and would not eat properly. Of course, good citizenship cannot just be about the jobs we do - paid or unpaid. Good citizenship is more than this. Good citizenship should be evident in everything we do and say. We should all strive to be good citizens in our words and actions - smiling at people in the street and thanking the shopkeeper as he or she hands us our change are both small examples of how we can be better citizens. ...read more.