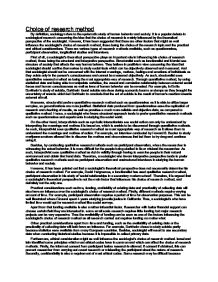 Choice of research method By definition, sociology refers to the systematic study of human behavior and society. It is a popular debate in sociological research concerning the idea that the choice of research is mainly influenced by the theoretical perspective of the sociologist. However, it has been suggested that there are other factors that might as well influence the sociologist's choice of research method, those being the choice of the research topic and the practical and ethical considerations. There are various types of research methods available, such as questionnaires, participant observation, longitudinal studies and interviews. First of all, a sociologist's theoretical perspective plays an important role in influencing his choice of research method, those being the structural and interpretive perspective. Structuralist such as functionalist and Marxist see structure of society that affects the way human behave. They believe in positivism view concerning the idea that sociologist should confine themselves to study social facts which can be objectively observed and measured. And that sociologist should not be concerned with the internal meanings, motives, feelings and emotions of individuals as they exists only in the person's consciousness and cannot be measured objectively. ...read more.

As such, interpretivist sees qualitative method as rich in validity through having to examine people in their natural environment and obtain first hand data. Therefore, a sociologist who favors interpretive perspective tends to prefer qualitative research methods such as participant observation and unstructured interviews in studying the human behavior and society. However, it has been pointed out that a sociologist's theoretical perspective does not necessarily determine his choice of research method. For example, David Hargreaves, a functionalist has used qualitative research method, participant observation in his study of 'social relationships in a secondary modern school'. Therefore, it is argued that a sociologist's theoretical perspective is not the main factor that influences his choice of research method, and definitely not the only one. Practical considerations such as time, funding, availability of existing data and practicality of collecting data will also have an influence over the sociologist's choice of research method. Firstly, different methods require varying amount of time. For example, participant observation requires a period of time for observation purposes. This can be well illustrated where Cicourel spent 4 years studying juvenile justice in California. ...read more.