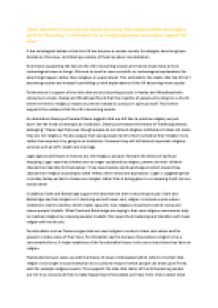 Claims that the UK is now a secular society are wrong. Both religious activity and religious belief are flourishing. To what extent do sociological arguments and evidence support this view?

﻿Claims that the UK is now a secular society are wrong. Both religious activity and religious belief are flourishing. To what extent do sociological arguments and evidence support this view? A hot sociological debate is that the UK has become a secular society. Sociologists have long been divided on this issue, contributing a variety of theories about secularisation. One theory supporting the fact we the UK is becoming secular are that we know have a more technological view on things. We tend to look for more scientific or technological explanations for why things happen rather than religious or supernatural. This contradicts the claims that the UK isn?t becoming secular and instead is providing us with explanations of the UK becoming more secular. ...read more.

However they will still attend important religious services such as birth, death and marriage. Leger agrees with Davie in that we are still religious and puts forward the theory of spiritual shopping. Leger says that children are no longer socialised by religion, parents let their children choose their identity for themselves ? they have become spiritual shoppers which means they choose their religion according to what reflects their needs and aspirations. Leger is suggesting that in society today we like to choose our religion rather than it being given to us meaning it will suit our needs better. In addition Stark and Bainbridge support the idea that we aren?t becoming secular. ...read more.

Postmodernist Lyon came up with the theory of Jesus in Disneyland which refers to the fact that religion is no longer a social institution but a cultural resource which people can draw upon if they wish for example religious events. This supports the idea that claims of the UK becoming secular are not true, because all that is really happening is that people just have more choice about what religion they follow and we also don?t need to attend religious institutions to be religious we can ?believe without belonging.? To conclude it is probably the case that the UK is becoming a secular society. However we must bear in mind the idea suggested by Heelas and Woodhead that argues we are becoming secular because we go to church to do spiritual activities rather than religious which suggests that evidence on this debate is far from conclusive. ...read more.