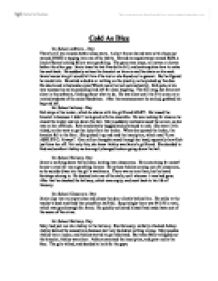 Cold As Dice Int. School cafeteria - Day There's still ten minutes before class starts. A short brown haired teen with a buzz cut named JAMIE is tapping into one of his habits. He and an acquaintance named ROB, a kind of funny looking fellow were gambling. The game was craps; roll seven or eleven before the other guy. Jamie loses his last five-dollar bill, and contemplates how to make his cash back. He suddenly notices the bracelet on his arm and the chain on his neck. Jamie knows his girl would kill him if he lost or she found out in general. But he figured he would win. He called a double or nothing on the jewelry, as he picked up the dice. ...read more.

When she opened the locker, the bracelet fell to the floor. She picked it up and read the inscription, which read "Love ASHLEY G. Always". One million thoughts raced through her head, especially how Rob just blew her off. Not only this; she knew Ashley was Jamie's girlfriend. She decided to find and confront Ashley as she angrily banged lockers going down the hall. Int. School Hallway- Day Jamie is walking down the hallway, looking into classrooms. He is searching for unicef boxes to steal for more gambling money. He notices Ashley coming out of a classroom, as he suicide dives into the girl's washroom. There was no one there, but he heard footsteps closing in. He ducked into one of the stalls, until whoever it was had gone. ...read more.

The girls talked, and decided to look for the guys. Int. School Cafeteria- Day Rob was happy and surprised that Jamie had pulled him out of class for more craps. He insisted that Jamie should keep what he had left, but Jamie ignored him. Jamie put down money, and insisted Rob put up the bracelet and the chain. The chain went into the pot with the money as Rob paused in thought. He was getting ready to explain about the bracelet when it fell in between the two boys. They looked up to see Ashley and Mary. The girls were furious, and it showed. After a barrage of verbal abuse, the girls left the two with what little dignity they had left and walked out. The boys sat confused and angry. All of a sudden each boy was grabbed on his shoulder. They both looked up only to see the principal, Jamie's stomach turned. By: Alvin Tynes ...read more.