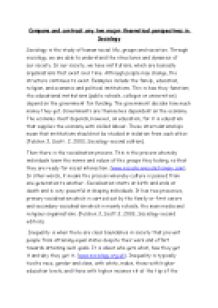 ﻿Compare and contrast any two major theoretical perspectives in Sociology Sociology is the study of human social life, groups and societies. Through sociology, we are able to understand the structures and dynamics of our society. In our society, we have institutions, which are basically organisations that exist over time. Although people may change, the structure continues to exist. Examples include the family, education, religion, and economic and political institutions. This is how they function; the educational institutions (public schools, colleges or universities) depend on the government for funding. The government decides how much money they get. Governments are themselves dependent on the economy. The economy itself depends, however, on education, for it is education that supplies the economy with skilled labour. These interrelationships mean that institutions should not be studied in isolation from each other. (Fulcher.J, Scott. J, 2003, Sociology second edition). Then there is the socialisation process. This is the process whereby individuals learn the norms and values of the groups they belong, so that they are ready for social interaction. (www.socialsciencedictionary.com). In other words, it means the process whereby culture is passed from one generation to another. Socialisation starts at birth and ends at death and is very powerful in shaping individuals. It has two processes, primary socialisation which is carried out by the family or first carers and secondary socialisation which is mainly schools, the mass media and religious organisations. (Fulcher.J, Scott.J, 2003, Sociology second edition). Inequality is when there are clear boundaries in society that prevent people from attaining equal status despite their work and effort towards attaining such goals. ...read more.

It is basically need for society to function properly. (Bessant, Judith and Watts, 2002, Sociology Australia). Like Durkheim, Parsons began with the question of how social order is possible. He believed that if people were allowed to pursue their own interests then there would be destruction. Parsons believed that only a commitment to common values provides a basis for order in society (value consensus). However, Marxism is completely different to Functionalism. From a Marxist perspective, in every society the ?mode of production? meaning the way of producing dictates major relationships between owners and workers. Marx argues that in each epoch the economy is the defining feature. The economy therefore provides the infrastructure (the base) from which everything else is formed. This economic infrastructure determines the role and function of the basic institutions in society, what Marx refers to as the ?Superstructure?, e.g. the family, religion, media etc. (Haralambos. M, Holborn. M, 2000, Themes and Perspectives of Sociology). Marx continues to explain how society works from his point of view. He explained how the ?Bourgeoise? (the ruling class) owns everything and how their power stems from their wealth as they own the means of production (property, machinery, factories, treasure etc). ??The potential for class conflict is always present, a ruling class had to continually act to reproduce its domination of the social class.??(www.sociology.org.uk).Marx then went on to develop an idea which he called ?alienation?. By this, he meant the transformation of peoples? own labour into a power which rules them as if by a kind of natural law. ...read more.

Functionalism is accused of having logical flaws and inconsistencies, it often uses a circular argument that can look convincing initially but is in reality illogical. (Haralambos. M, Holborn. M, 2000, Themes and Perspectives of Sociology). Even though theses two theories had weaknesses, they also had strengths. Marxist theory looks at society as a whole, therefore acknowledging all the social forces involved. It recognises the power interests of different groups. It is good at explaining conflict and change in society. Marxism stresses the role of class struggle (conflict) within society between the proletariat (workers) and the bourgeoisie (owners). It also recognises that society is organised under capitalism, in that the bourgeoisie aim to maximise profit by exploiting the proletariat (www.sociology.org.uk). One of the strengths of Functionalism is that it asserts that there are purposes for social conditions or facts. For example, under a functionalist point of view the newspaper deliverer and the sewer worker all contribute to the function of the entire unit, without serving these purposes, the social structure would not function properly. (www.courseworkbank.co.uk). This essay has outlined the many comparisons and contrasts which can be made between the functionalism and Marxism perspectives. It appears that Marxism is very much focused on capitalism and conflict, whereas functionalism views society as working together towards complete consensus. To conclude, I believe that both perspectives explain, and help us to understand, the way in which society functions. However, these are not the only theories. There is also the theory of interaction. This is completely different from the above two because it looks at society as micro and the other two look at society as macro. ...read more.