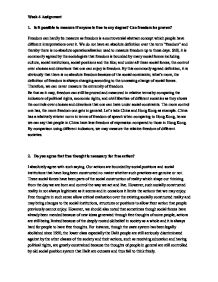 Concept of freedom - Is it possible to measure if anyone is free to any degree? Can freedom be proven?

1. Is it possible to measure if anyone is free to any degree? Can freedom be proven? Freedom can hardly be measure as freedom is a controversial abstract concept which people have different interpretations over it. We do not have an absolute definition over the term "freedom" and thereby there is no absolute operationalization used to measure freedom up to these days. Still, it is commonly agreed by the sociologists that freedom is bounded by many social forces including culture, social institutions, social positions and the like; and under all these social forces, the control over choices and directions that one can enjoy is freedom. By this commonly agreed definition, it is obviously that there is no absolute freedom because of the social constraints; what's more, the definition of freedom is always changing according to the unceasing change of social forces. Therefore, we can never measure the extremity of freedom. ...read more.

However, such socially constructed reality is not always legitimate as it seems and in occasions it limits the actions that we may enjoy. Free thoughts in such sense allow critical evaluation over the existing socially constructed reality and may bring changes to the social institutions, structures or positions to allow freer action that people previously cannot enjoy. However, we should also noted that sometimes though social forces have already been mended because of new ideas generated through free thoughts of some people, actions are still being limited because of the deeply rooted old belief in society as a whole and it is always hard for people to have free thoughts. For instance, though the caste system has been legally abolished since 1950, the lower class especially the Dalit people are still seriously discriminated against by the other classes of the society and their actions, such as receiving education and having political rights, are greatly constrained because the thoughts of people in general are still controlled by old social position system that Dalit are outcasts and thus fail to think freely. ...read more.

Traditional authority: In some indigenous communities which still have a extended family structure such as the communities in walled villages of Hong Kong, the first born male child enjoy the privilege of inheritance. He is also the authority figure of the community. It is legitimated by the sanctity of tradition handed down from the past and is through heredity under patriarchy system. Charismatic authority: Mother Teresa, a very well-respected Catholic religious figure who is regarded as one of the real servants of God because of her morality and contribution to charity in the third world countries. Her exemplary character, faith and spirit inspire Catholics around the world to live truly as a Catholic following God's will. Her heroism of ministering the poor and needies of the third world countries impresses Catholics and greatly influence their attitudes. Rational-legal authority: Any bureaucratic officials or political leaders. Their authorities are empowered by legal rationality, legal legitimacy and bureaucracy. They implement policies without any interference of people but based on law with legitimacy to govern people. ?? ?? ?? ?? Week 4 Assignment ...read more.