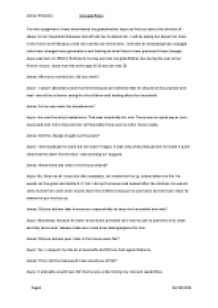 ﻿James Mckenzie Conjugal Roles For this assignment I have interviewed my grandmother Joyce to find out about the division of labour in her household between herself and her husband Jon. I will be asking her about her roles in the home and finding out why she carried out these roles. I will also be evaluating how conjugal roles have changed over generations and looking at what factors have produced these changes. Joyce was born in 1930 in Richmond, Surrey and met my grandfather Jon during the war at her friend?s house. Joyce married at the age of 18 and Jon was 26. James: After you married Jon, did you work? Joyce: I wasn?t allowed to work full time because Jon believed that he should be the provider and that I should be at home caring for the children and looking after the household. James: So Jon was main the breadwinner? Joyce: Jon was the only breadwinner. That was essentially his role. There was no equal pay as men were paid a lot more than women so financially there was no other choice really. James: Did this change trough out the years? Joyce: I eventually got to work but Jon wasn?t happy. ...read more.

The majority of women were not working in her society. This was also the case before the war according to Anne Oakley (1974). She argues that from 1819 onwards a number of Factory Acts restricted child employment; this meant that children had to be supervised day to day and the role fell to women as in 1841; male workers demanded a gradual withdrawal of female labour in factories. Then came the Mines Act in 1842, banning women from the mines and excluding them from a new Trade Union movement. Gradually women became excluded from various industries and became restricted to the home. Without a source of income, women and their children became dependant on men. This economic dependence and restriction to the home meant that the mother/housewife role became the primary role for women. (http://www.lexden-publishing.co.uk/resources/samples/9781904995043.pdf). I also asked Joyce who was the breadwinner. The answer was obvious in terms of the unavailable work for women however Joyce also raises the point that if she was the parent that went out to earn while Jon stayed at home with the children, it was not economically feasible. The wage that she would have brought home would not have been as high as her husband?s, as men were paid a higher salary for exactly the same labour. ...read more.

(Haraloumbus, 2008, (pp497). Mary Boulton (1983) also argues that the studies which focus on the allocation of work in the home exaggerate the extent of men?s involvement with childcare (Haraloumbus, 2008, (pp498). The Young and Willmott theory was developed in the 70?s and argues that roles in the house were becoming more equal and that family life improved because of this. In summarising my interview it?s clear that this was very much a successful functionalist family, with the marriage lasting until my grandfather passed away. Having asked Joyce if she considered her role as fair she agreed, not because tasks in the house were split but because society sent Jon out to work and she believed her work was to be done at home. Oakley (1974) argued that housework led to alienation, monotony and lacked value without pay (http://www.lexden-publishing.co.uk/resources/samples/9781904995043.pdf.) In a modern day society with choices for women brought about by a feminist movement, Oakley?s viewpoint would very much be the case. But in this period women like Joyce were proud women, whose role was vital in bringing up children and keeping a home for her family. As there was little choice for women there was little there was nothing to compare to and this enabled her to lead a happy life. ...read more.