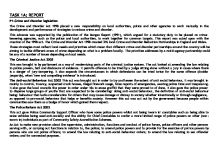 TASK 1A: REPORT P1-Crime and disorder legislation The Crime and Disorder Act 1998 placed a new responsibility on local authorities, police and other agencies to work mutually in the development and performance of strategies to reduce crime and disorder. This advance was supported by the publication of the Morgan Report (1991), which argued for a statutory duty to be placed on crime lessening agencies, such as the police and local authorities, to work together for common targets. This report was acted upon with the creation of the 1998 act. The Crime and Disorder Act 1998 created 376 local Crime and Disorder Reduction Partnerships in England and Wales. These strategies must reflect local needs and priorities which mean that different crime and disorder partnerships around the country will be aiming to tackle different areas of crime depending on what is a problem locally. The priorities addresses by a multi-agency partnership could be any of a number of issues depending on local needs. The Criminal Justice Act 2003 This was brought in by parliament as a way of modernizing parts of the criminal justice system. The act looked at amending the law relating to police powers, bail and disclosure of evidence. It permits offences to be tried by a judge sitting alone without a jury in cases where there is a danger of jury-tampering. ...read more.

It will also impact on them because police officers were given the power to order under 16s to send them home after nine, this will also affect communities because it will make them feel safer both in their homes and out on the streets because there will be more control held by the police. The police will also be impacted because their officers will be carrying more responsibility do make the right decisions. D-1 Widens the use of antisocial behaviour orders (asbos) to allow local authorities, registered social landlords and the British Transport police to apply for asbos. � Allows police and community support officers to issue dispersal orders to any group of two or more people, within a designated area, whose behaviour they believe is likely to cause harassment, alarm or distress to members of the public. Refusing to leave or returning to the area constitutes a criminal offence. � Grants police officers the power to order young people under the age of 16 to return home after 9pm. � Creates on-the-spot fines for noise, graffiti and truancy. � Creates closure orders. Quickly nicknamed the "crack house closure order" this provision enables the police to shutter premises used for the supply, use or production of class A drugs for a period of up to six months. ...read more.

combating poor parenting, they are put against parents who's children have committed a crime such as truancy or behaved in an anti social manner. The worst case scenario for a parent is that they could be put in prison, they can also be charged up to �1000 or attend parenting classes Reparation Orders: These are used to help offenders see the consequences of their offending. They order the offender to repair the harm they caused directly or indirectly to the victim or to the community. For example cleaning graffiti. This is overseen by a youth offending team. Restriction Of Liberty Order: Tis is an order that require the offender or offenders to remain in or out of a specific area for a certain amount of time. Community Rehabilitation Order: It was formally a probation order(sentence) given out by a court for criminals aged 16 and over. It is for a period of between 6 months - 3 years. This makes the offender accountable for their crime and is also to resolve any personal issues. Restorative Justice: This encourages the offender to take responsibility for their actions e.g. apologizing to the face of the victim, returning stolen money/possessions. In addition, it provides help for the offender in order to avoid future offences. Restorative justice that fosters dialogue between victim and offender shows the highest rates of victim satisfaction and offender accountability. ...read more.