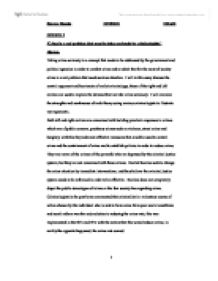 'Crime is a real problem that must be taken seriously by criminologists.' Discuss

OPTION 2 'Crime is a real problem that must be taken seriously by criminologists.' Discuss. Taking crime seriously is a concept that needs to be addressed by the government and political agencies in order to combat crime and to admit that for the most of society crime is a real problem that needs serious attention. I will in this essay discuss the central argument and key tenets of realist criminology; those of the right and left realism are used to explain the demand that we take crime seriously. I will examine the strengths and weaknesses of each theory using various criminologists to illustrate my arguments. Both left and right realism are concerned with building practical responses to crimes which are of public concern, predatory crimes such as violence, street crime and burglary, with this they advocate effective measures that could be used to control crime and the containment of crime and to establish policies in order to reduce crime. They are aware of the crimes of the powerful who are bypassed by the criminal justice system, but they are not concerned with these crimes. Realist theories seek to change the crime situation by immediate interventions, and they believe the criminal justice system needs to be reformed in order to be effective. ...read more.

Charles Murray (1990) in his chapter on the 'Underclass' defines crime as a symptom of declining moral standards. In the 1960's family breakdown, dependency on the welfare state, lack of appropriate child rearing, lack of discipline from parents to children and single parenting all help in the development of the criminal underclass. Economic growth means more expectations for the criminal without the opportunities to obtain them unless it is though crime. Left realism emerged at the same time as the right; great emphasis was placed on the criminal justice system who decides what preventative measures are used to reduce crime and what punishments are given for the ones that are caught They took their ideas from writers such as Lea and Young and Currie. Left realists reject the idea of 'partial' theories of crime; it also seeks to understand the effect crime has on its victims whom are mainly working class and seeks to discover the social causes of crime, omitted by previous theorists. Left realists are critical of conservative and radical criminology, although a lot of their tenets are similar as they all agree that deprivation and marginalisation are the key causes of crime. Crime occurs because of economic and political discontent and the absence of economic opportunities for the remedy. ...read more.

The rise in crime has gone hand in hand with economic inequality. We live within a market society; a society that promotes crime and morally those that commit crimes can see no wrong in their actions as it is a way of getting back at society for their deprivation. Crime is a serous problem especially for the working class, ethnic and vulnerable people in society and something needs to done about it, the central task of the realist is to go back to the drawing boards take up the theories of the past and execute them and take on board the causes of crime and the rehabilitation process and examine the consequences of crime until this is done crime will always be a serious problem. We need to build more effective movements for social change. Scraton and Chadwick (2003) are critical of the Left Realist theory; they see the relationship between structure and agency. The structure relations in society encompass the production, re-production and neo-colonialism with regards to economics and politics which give rise to the agency of how the state and other agencies use the criminal justice system to legitimate state rule and cause economic marginalisation for the vulnerable individuals in society whether criminal or not. WORD COUNT: 2,108 WORDS Sharon Ebanks T274910X TMA03 1 ...read more.