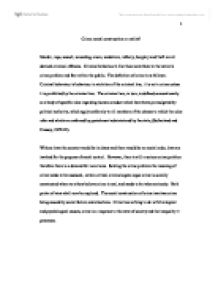 Crime: social construction or reality? Murder, rape, assault, wounding, arson, vandalism, robbery, burglary and theft are all deemed criminal offences. Criminal behaviour's like these contribute to the nation's crime problem and fear within the public. The definition of crime is as follows: Criminal behaviour is behaviour in violation of the criminal law, it is not a crime unless it is prohibited by the criminal law. The criminal law, in turn, is defined conventionally as a body of specific rules regarding human conduct which have been promulgated by political authority, which apply uniformly to all members of the classes to which the rules refer and which are enforced by punishment administered by the state, (Sutherland and Cressey, 1970:10). Without laws the country would be in chaos and there would be no social order, laws are invoked for the purpose of social control. However, there is still a serious crime problem therefore there is a demand for more laws. Solving the crime problem the meaning of crime needs to be assessed, certain critical criminologists argue crime is socially constructed where as others believe crime is real, and needs to be taken seriously. Both points of view shall now be explored. The social construction of crime involves crime being caused by social factors and situations. Crime has nothing to do with biological and psychological causes; crime is a response to the state of society and the inequality it possesses. Theories which support the social construction of crime are: Labelling, Marxism, Gender Studies and the New Criminology, these theories will now be explored. The Labelling Theory involves labelling deviant human beings as criminal. Once established a criminal they can now be punished for their actions. Criminals are labelled criminal for the purpose of social order. These deviant behaviours will not be tolerated in society. That is the impression Law Agents have to impose, however critical criminologists propose that the whole labelling system encourages more criminal behaviour. ...read more.

Legislating the laws produces many more employment opportunities and law enforcers. The conditions the workers receive and the rebellion they possess is not aimed at the ruling class, but in fact their own class. "Crime is a reaction to the life's conditions of a person's social class". Marx also proposes that crime would vary from society to society. Societies with less intense class struggles should have much lower rates of crime. Marx's theory does support the idea that crime is socially constructive. The ruling class forced the working class to work in appalling conditions for low wages. The ruling class express inequality and exploitation. Due to the way society is treating them, their actions result in crime. They know no other way to express their anger about the way they are treated but through crime society has to work to earn money. The lower class jobs may be their only opportunity for employment. The workers are putting in all the hard work for the production of goods that do not but they themselves do not gain the rewards for doing this. Although Marx's theory does prove that crime is socially constructive in some instances there are however some flaws to the theory. Crime would still, and used to be present in industrialised societies, so capitalism is not the sole cause of crime. Marx's theory also focuses upon lower class crime. Many people of the high, ruling classes also engage in crime. The higher class particularly engage in white collar crime. If the lower class are punished for crimes mainly involving violence and the ruling class are allowed to get away with crime, why do the higher class only focus upon white collar crime? The new criminology proposed by Taylor et al, (1973) fuses work on labelling theories and the Marxist approach. Taylor et al, (1973:232) proposed that a 'fully social theory of deviance must include seven vital elements. ...read more.

Young (1992:51-53) believes there are four elements in understanding crime. These are; the victim, the offender, reaction of the formal agencies of the state and the reaction of the public. These four elements produce the 'Square of crime'. The crime rate is the product from a reaction of these events. The victim may encourage offenders through inadequate defence or may indulge in crime due to his personality. The offenders include themselves (types of crimes committed, offending rates and so on). The state has the power to label individuals and society so can force formal or informal social control. To control crime there must be intervention at each part of the square, at the level of factors which give rise to the punitive offender. Left realism proposes that crime can be tackled through participation with the public, together with right realism they believe their questions can be answered through public surveys. The states response is not doing a good enough job, so the public's ideas could be a step in the right direction. Broaden et al (1988:55) criticize the left realist approach. "The truth is that whilst it would be nice (and convenient) to think that complex public policies could be based directly on people's experiences, perceptions and attitudes, it is anything but realistic. The reality is that peoples limited experiences, unreconstructed perceptions and shifting attitudes do not translate immediately and unproblematically into socially just policies - even if a survey could get at them accurately". Concluding this essay it appears crime is both socially constructed and real. Crime is socially constructed in the form of labelling individuals transforming the deviants into criminals. The media is responsible for over- and under-representation resulting in moral panics. Crime can be caused through feelings of exploitation and inequality through living and working in a capitalist society. Gender roles can influence the rates of crime between males and females. Above all crime is real. Victims live to tell the tale. Crime is presented as a huge problem which certain issues need to be addressed. While there are some flaws to the radical theories, crime certainly is a reality. ...read more.