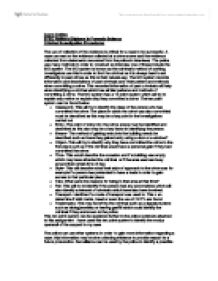 Laura Oakley BTEC National Diploma in Forensic Science Criminal Investigation Procedures The use of collection of the evidence is critical for a case to be successful. A case can rest on the evidence collected at a crime scene and the evidence collected from statements recovered from the police in interviews. The police use many methods in order to construct an interview one of these include the MO system. The MO system is known as the criminal's method of working. Investigators use this in order to find the criminal as it is always hard to act differently to past crimes as this is their natural way. The MO system records information and descriptions of past criminals and their pattern and methods when committing a crime. This recorded information of past criminals will help when identifying a criminal which has similar patterns and methods of committing a crime. The MO system has a 10 point system which will try to explain any motive or explain why they committed a crime. The ten point system can be found below. * Classword- This will try to identify the class of the person who has committed the crime. The place in which the crime was also committed must be described as this may be a key point in the investigations carried out. * Entry- The point of entry into the crime scene must be identified and described as this also may be a key factor in identifying the person. * Means- The method of gaining entry into the building needs be described such as Have they gained entry using a door or a window? * Object- This will try to identify why they have committed the crime in the first place such as if the criminal would have a personal gain if they had committed the crime. * Time- This would describe the occasion and if a building was empty which may have attracted the criminal or if the area was less busy around that certain time of day. ...read more.

* Style- Suspect may have imitated a professional worker in order to gain entry to the building thus gaining trust from the victim. * Tale- The reasons may have been to warn the victim using the letter or to scare the victim. * Pal- the way the crime was committed indicates no other accomplices were present at the time of the crime. No further fingerprints or DNA was found. * Transport- No evidence of the use of transport was found at the scene. * Trademarks- No obvious trademarks were found however the threatening note could have been left for the police to find. Task Two Interview Technique- PEACE Model The PEACE model identifies the steps needed in an interview structure to make it successful, these steps being planning and Preparation, Engage and Explain, Account, Closure and Evaluation. These steps were presented to the police in two guidebooks (guide to interviewing and interviews rule book). The guidelines which were stated in these books were not made mandatory but represented the best way to interview a suspect. The police were also asked to attend a 5 day training course which showed the police the steps of the PEACE model to insure all police officers would use the correct techniques during all interviews taken place. Planning and Preparation Planning is the mental process of getting ready to conduct an interview whereas preparation is the considering what needs to undertaken before the interview process begins. This would include the sort of location, environment and the administration needed whilst interviewing. All interviews are needed to establish the facts and evidence recovered from a scene and interview a suspect to obtain evidence from them to disprove or prove that they were involved in the crime committed. This will also allow the testing of evidence and give all suspects the opportunity to give an explanation. Engage and Explain At the beginning of an interview this step allows the person being interviewed the choice where they wanted legal representation before and during the interview. ...read more.