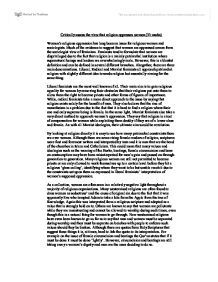 Critically assess the view that religion oppresses women (33 marks) Women's religious oppression has long been an issue for religious women and sociologists. Much of the evidence to suggest that women are oppressed comes from the sociologist view of feminism. Feminists tend to formulate that women are disprivileged due to the fact that religion is a mainly patriarchal institution where supernatural beings and leaders are overwhelmingly male. However, this is a blanket definition and can be defined in several different branches. Altogether, there are three main denominations. Liberal, Radical and Marxist feminists all approach patriarchal religion with slightly different idea towards religion but essentially aiming for the same thing. Liberal feminists are the most well known of all. Their main aim is to gain religious equality for women by removing their obstacles that their religions put onto them to allow them the right to become priests and other forms of figures of importance. While, radical feminists take a more direct approach to the issue by saying that religion exists solely for the benefit of men. ...read more.

Again this was interpreted from a religious scripture and adopted as a value that is strongly held on to. Others are known to say that women are pollutants while they are menstruating and cannot be allowed to worship during such times, even though this is a natural thing for women to go through. Non-westernised religions have even been known to go as far as to say that men and women must be separated during worship and they must be separate on beaches with people to enforce such values should they be broken. Although there are quotes from Holy Scriptures that suggest these things it is, at times, hard to link the quote to its interpretation. For example on the issue of female circumcision and beatings the Qur'an states that if it must be done it must be done 'lightly'. However, circumcision and beatings are still taking away a woman's dignity and men are the ones deciding to do so. Although there is a lot of evidence to suggest that women are oppressed by religion, there are modern changes that would say that women are becoming just as important as men when it comes to religion and working. ...read more.

Stereotypically women are born with a maternal instinct to want the best for their children and believe that religion is the most likely candidate to provide this for them, depicting that it is possible that women do not see actually see religion as oppressive. To westernised society wearing a Burka looks as though it is taking away identity. However, to a Muslim woman who actually understands, it is not a controlling tool but liberation against judgement allowing them to go through daily life without any limitations. According to the women, there is no actual value that states they must wear it which makes the decision optional. After the 9/11 and 7/7 bombings more Muslim women chose to wear it because they rejected the idea that these terrorists were true Muslims and felt the need to identify themselves apart from others, indicating that they are actually happy to follow their religions teachings and values. Many views that are upheld in the name of religion are not actually stated in any scriptures. This could indicate that it is not actually religion that oppresses women, but society itself. ...read more.