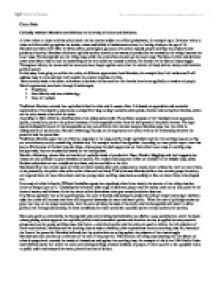 Critically evaluate Marxists contributions to the study of crime and deviance.

Critically evaluate Marxists contributions to the study of crime and deviance. A crime refers to those activities which break the law and are subject to official punishment, for example rape. Deviance refers to those activities which go against the norms, values and beliefs of mainstream culture, i.e. having a baby at the age of 16. Marxism started by Karl Marx in 1818, and is a sociological approach with which regards people as being the producers and products of society. Marxism criticizes a capitalist society where by the means of production are owned by the ruling class and the lower class. The bourgeoisie are the ruling class, whilst the proletariats are seen as the lower class. The idea of crime and deviance came when Marx tried to look for something in the real world that caused conflicts. He found it in the idea of class struggle. Throughout history the haves and the have-nots have fought against each other for control of food, shelter, money and therefore political power. In this essay I am going to outline the variety of different approaches from Marxism, for example New Left realists and I will address these in turn and then I will explain the control theories of crime. Marx actually made a few direct references to deviance in his work but his theories have been applied by a number of people. ...read more.

Having being treated and defined as outsiders the 'hippies' tend to express this difference, i.e. hair is grown long and unconvential clothes are worn. Left Realists put forward that our consumer society continually bombards us with messages of 'must have' which leaves people who cant afford these things left out and 'alienated'. Some turn to crime as a result of this. Left realism originated in Britain but has began to influence criminologists in other parts of the world including Canada and Australia. Left realist criminologists are critical of perspectives which see longer sentences and more prisons as the solution to crime, but they also oppose the views of what they term 'left idealists'. Jock Young, John Lea and Roger Matthews are known as the left realists, and they provide an analysis of crime which starts from structural Politically left realists tend to see their approach as being close to the position of the British Labour Party. Jock Young argues that right-wing politicians in industrial capitalist societies have been particularly successful in presenting themselves as the forces of law and order. Left realists have tried to counter the popularity of right-wing law and order policies by presenting what they see as realistic proposals for change within the frame work of existing societies which address the concerns of ordinary people. ...read more.

- Thirdly not all laws benefit Under Class, many come from genuine agreement. Marxists reject this, laws that seem to benefit everyone are useful ultimately to Under Class. By providing a few laws that are of use to everyone, they hide their real nature. This is rejected by Mishra- this form of Marxist analysis, 'left Functionalism' means that any law can be shown to be in some way 'functional' to maintenance of capitalism. This makes any meaningful debate with Marxists, impossible. - Fourthly societies, which call themselves Marxist, have equal crime rate to capitalist ones, yet in Marxist society, there should be no crime. Marxists attack traditional concern of sociologists of crime and deviance with street crime. They argue crime arises from definitions of crime imposed by Under Class. They focus on extent of crime committed by corporations and white collar crime, demonstrating that crime is diffused through society. Ruling class don't manipulate activities of control agencies. These agencies strongly influenced by needs of capitalism but to some extent are autonomous. According to Hall, the sociologist must uncover links between way control orgainisations operate, the effects upon people being controlled and benefits to ruling class. Marxist theories are the central ideas in the conflict view. Marxism believes in conflict, coercion and contradiction and through its capitalist society crime will always play a large part and unfortunately it is only the poor who will suffer for there 'petty' crimes, and the rich will thrive from there's. Claire Pask ...read more.