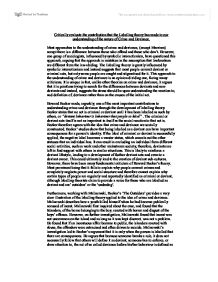 Critically evaluate the contribution that the Labelling theory has made to our understanding of the nature of Crime and Deviance.

Critically evaluate the contribution that the Labelling theory has made to our understanding of the nature of Crime and Deviance. Most approaches to the understanding of crime and deviance, (except Marxism) accept there is a difference between those who offend and those who don't. However, one group of sociologists, influenced by symbolic interactionism, have questioned this approach, arguing that the approach is mistaken in the assumption that lawbreakers are different from the law-abiding. The Labelling theory is greatly influenced by symbolic interactionism and instead suggests that most people commit deviant or criminal acts, but only some people are caught and stigmatised for it. This approach to the understanding of crime and deviance is an opinion dividing one, facing many criticisms. It is unique in that, unlike other theories on crime and deviance, it argues that it is pointless trying to search for the differences between deviants and non-deviants and instead, suggests the stress should be upon understanding the reaction to, and definition of, deviance rather than on the causes of the initial act. Howard Becker made, arguably, one of the most important contributions to understanding crime and deviance through the development of labelling theory. Becker states that no act is criminal or deviant until it has been labelled as such by others, or "deviant behaviour is behaviour that people so label". ...read more.

However, Liazos criticises the labelling theorists for simply exploring marginally deviant activities, by doing so, they are reinforcing the idea of pimps, prostitutes and mentally ill people as being deviant. Even by claiming to speak for the underdog, labelling theorists hardly present any challenge for the status quo. Labelling theory alerts us to the way in which the whole area of crime depends upon social constructions of reality, law creation, law enforcement and the identities of the rule breakers are thrown into question. The media play a key role in all three of these processes, as most people's perceptions of crime are actually created or at least informed by the media. British Sociologist, Leslie Wilkins showed how the response to deviance, instead of just by the individual, but by agencies such as the police and the media, can actually generate an increase in deviance. This was known as Deviancy Amplification. Wilkins stated that when acts are defined as deviant, the deviants become stigmatised and cut off from mainstream society. They become aware that they are regarded as deviants and, as a consequence of this awareness, they become more isolated and even result in developing their own subcultures, which further confirms and strengthens them in their deviance. One example of this was provided by Jock Young, who used this concept in his study of drug use in North London. ...read more.